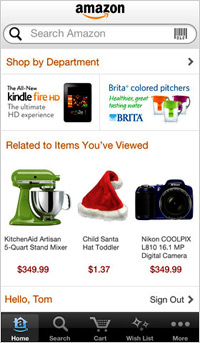 Consumers are becoming more comfortable with mobile commerce and user satisfaction as the mobile retail experience is improving.

In a recent study, Amazon took the No. 1 spot in mobile satisfaction, per the ForeSee Mobile Satisfaction Index: Holiday Retail Edition, which was just released.  Apple followed at No. 2 with 83 points; QVC, 83; NewEgg, 80; and Victoria's Secret, 80.

The survey of more than 6,200 consumers collected during the holiday shopping season has retail juggernaut Amazon scoring highest among 25 of the top mobile commerce companies.

Results from a recent survey found 70% used a mobile phone while in a retail store during the 2012 holiday season to research information on products and services. Of those, 62% accessed the same store's site or app, and 37% a competitor's site or app.

Some 57% of survey respondents visited the company's Web site as their first step in shopping experience, in which 80% were highly satisfied in the site. Most products will soon have a QR code, allowing consumers to point and shoot the phone camera to search for more information.

As to specifics, customers are a bit more satisfied with their mobile experience for retailers than with financial services. In a study in November, the average satisfaction score for the largest financial services companies' mobile sites and apps scored 77, trailing retailers, which scored 78.