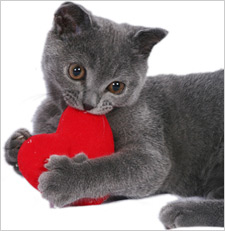 Pet owners are more likely to celebrate Valentine’s Day, according to Exponential Interactive.

Their data showed that: people buying pet food and supplies (for both dog and cats) have a propensity to spend money on Valentine’s Day products more than any other category.

“We see a stronger income profile for dog owners than cat owners (based on income and age group),” Nelson tells Marketing Daily.

Cat owners tend to be fans of home-based activities such as knitting and baking, he says.

“They therefore spend money on home furnishings and hobbies associated with the home,” Nelson says. “They are also big fans of romance novels. When they do venture out, you can most likely find them at restaurants. They are really into food and restaurants. Cat owners also show a preference for cruises.”

On the other hand, dog owners prefer going out, he says.

“They are actively fans of sporting events, concerts, movies and monster truck rallies,” Nelson says. “As outdoor enthusiasts they tend to spend money on sport apparel, RVs and motorcycles. They will also spend money on maintaining cars.”

The data is from Exponential's e-X Advertising Intelligence Platform, which aggregates over two billion daily user “events,” categorizes each event against a taxonomy of 50,000 attributes, and segments users based on shared attributes.

According to the company, the platform has the fifth-largest reach globally (after Google, Facebook, Yahoo and Microsoft, according to comScore) via more than 450 million unique monthly users and 2,000-plus named content-rich, premium, broad reach and targeted sites.