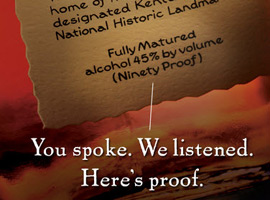 Maker’s Mark bourbon has become something of a social media case study as a result of not only listening, but actually making -- or rather, reversing -- a business decision based on its fans’ input.

The brouhaha began last week, after the spirits brand announced that in order to meet high demand levels and avoid shortages, it would reduce the alcohol level in its bourbon from 45% to 42%, or from 90 proof to 84 proof -- essentially diluting the product to stretch its supplies. (Sales of the brand rose 14% in 2011 and 15% in 2012.)

But after its fans went ballistic on social media about the planned change -- even threatening to start boycotts in order to "save" the original formulation -- the Beam Inc. brand employed social media to announce its reversal of the decision, and apologize.

On Sunday, Maker’s Mark tweeted the message: "You spoke. We listened," to its followers, creating a hashtag that was quickly picked up by fans -- many expressing relief and thanking the brand for seeing the error of its ways.

In a letter to fans that was posted on its Facebook page, as well as on its Web site, Rob Samuels and Bill Samuels, Jr. -- respectively the COO and chairman emeritus of Maker’s Mark -- wrote that they were "humbled" by fans' "overwhelming response and passion" for Maker’s Mark, and apologized for letting them down.

Noting the brand’s supply constraints, they wrote that “while we thought we were doing what’s right, this is your brand – and you told us in large numbers to change our decision … so effective immediately, we are reversing our decision … .

“The unanticipated dramatic growth rate of Maker’s Mark is a good problem to have, and we appreciate some of you telling us you’d even put up with occasional shortages,” the message continued. “We promise we’ll deal with them as best we can, as we work to expand capacity at the distillery.”

The reversal announcement on the brand’s Facebook page generated more than 14,000 “likes” and 2,200 comments within two hours, reported TheBlaze.

Many social media pundits praised the brand’s quick turnabout. For example, BusinessInsider observed that “while a tiny flub can be blown up tenfold because someone notices it on Twitter, Maker's Mark's response shows that, if well utilized, the very same tools can be used to help haters regain company faith.”

However, others maintained that the brand should have had a handle on consumers’ sentiments and the potential for backlash -- and some even suggested that it might have been wiser to ride out what might have been a relatively short-lived storm (although they obviously weren’t the ones fielding the phone calls and in-person complaints, in addition to the social comments deluge).

And as The Washington Post’s Neil Irwin pointed out in some detail, the brand and its parent Beam Inc. now face other -- rather fundamental -- business and marketing dilemmas.

Since good whiskey requires time to age, and the company didn’t raise prices once it realized that demand was outpacing supply, shortages began resulting in some markets. And since Maker’s Mark is one of Beam Inc.’s “power brands” – a major sales-driver that needs to be available in bars and retailers around the globe -- such shortages could be a serious problem, perhaps even eventually affecting relationships with distributors and bars/restaurants, Irwin noted.

Now, “it’s decision time for Maker’s Mark and Beam Inc.,” he wrote. “Are they really going to allow there to be shortages of Maker’s at times, meaning that they would be essentially charging a below-market price? Are they going to hike price and risk Maker’s status as a go-to mass market bourbon brand? Or are they going to find other, sneakier ways to get more supply of whiskey that is less blatant than diluting it, such as introducing even younger whiskey into the blend?”

Meanwhile, Forbescontributor Tim Worstall noted that, even with the reversal, Maker’s Mark may have still turned off some brand fans -- and quoted a business professor who pointed out that basic supply/demand economics could have offered a logical price discrimination/market segmentation strategy: Creating a new brand extension with a lower proof and a lower price, while raising the price of the original, premium product.

beverages, online, social media, spirits
1 comment about "Maker's Mark: Out Of The Fire, But...".
Check to receive email when comments are posted.
Next story loading