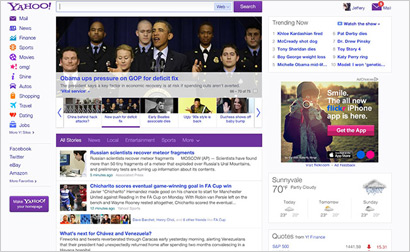 Yahoo on Wednesday unveiled a revamped home page as the company continues its latest turnaround effort under CEO Marissa Mayer.

The centerpiece of the updated Yahoo welcome screen is a social media-inspired stream of news stories that a user can scroll continuously and customize. In an appearance on NBC’s "Today Show" this morning, the Yahoo CEO emphasized that she wanted the home page to have a more "modern" feel.

“Designed to be more intuitive and personal, the new Yahoo! experience is all about your interests and preferences. Since streams of information have become the paradigm of choice on the Web, we’re introducing a newsfeed with infinite scroll, letting you experience a virtually endless feed of news articles,” wrote Mayer in a blog post today.

In line with Mayer’s focus on mobile, the new home page is also optimized for smartphones and tablets and is designed to work faster across devices. The new look -- which U.S. users will begin to see in the next few days -- is the latest upgrade under Mayer, following the relaunch of Yahoo Mail and the Flickr app for iPhone.

During Yahoo’s fourth-quarter conference call, the CEO said the company had identified a dozen key properties it would continue to overhaul this year as it strives to better compete with the likes of Google and Facebook.

Like Facebook and Twitter, Yahoo will also introduce advertising into its newsfeed in the form of text, video and image-based ads. The sponsored material will be marked as such and the ads will be targeted toward users with the same personalization and recommendation technology that Yahoo applies to other content, Mike Kerns, VP of product, Yahoo, told Wired.

The stories that someone sees in their Yahoo feed are tailored in part by what it learns about their preferences over time as well as taking cues from their activity on Facebook. Yahoo and Facebook have gradually increased their integration over the last few years.

A home page facelift itself doesn’t necessarily mean much. Under former CEO Carol Bartz, Yahoo invested heavily in developing and promoting a more personalized welcome page in 2009 to little effect. But Mayer, who took over in July, has so far delivered solid financial results, with Yahoo shares lately trading at or above $20 a share for the first time in four years.