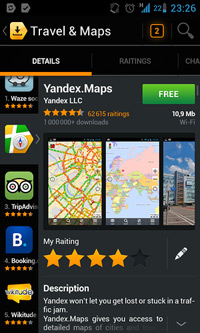 When Arkady Borkovsky, CTO Yandex Labs, participated in an OMMA panel on international search engines about three years ago, I had no doubt he would help to lead Russia's top search engine, Yandex, into a cycle of technical innovation. Now the company will go head to head with Google by creating a white-label store for Android apps and 3D interface for developers. The client servers will come preloaded on mobile devices.

At the Mobile World Congress 2013 in Barcelona on Monday, Yandex opened the doors to its alternative Android app store with more than 50,000 applications such as Twitter and Foursquare, and released a new version of Yandex.Shell, which gives the Android home screen a 3D look, allowing manufacturers to customize panels and skins on the phone.

Alexander Zverev, head of Yandex.Store project, believes that with the move Yandex joins the competition to ensure freedom of choice for consumers and others in the market. Apps in the store range from social networking, entertainment and games to news, business and finance, such as VK, Odnoklassniki, ICQ, Twitter, and Foursquare. The server client offers a variety of search options based on Yandex's search technology and strategy.

Device manufacturers 3Q, Explay, Oppo, PocketBook, Qumo, teXet, and Wexler will install the native client on their mobile devices that will ship to consumers in the Russian market. The OEMs also have an option to use the Yandex app store under their own brand name.

Revenue gained -- based on a rev-share model of 70% vs. 30% -- from app sales processed through the store is shared with partners like MegaFon, which already created a mobile app store, GetUpps! Yandex announced the partner program in October 2012 to give developers an opportunity to submit their apps to the store before opening the store to consumers.

Yandex said the apps are verified by Kaspersky Lab. Each new app submitted to Yandex.Store is checked for malware using Kaspersky Lab, which said Android continues to attract more malware and malicious bugs.