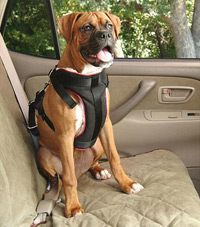 Subaru of America Inc. is partnering with the Center for Pet Safety to fund testing of car safety restraints for pets.

Currently, there are no performance standards or test protocols in the U.S. for pet travel products. Although many manufacturers claim to test their products, without test standards, these claims cannot be substantiated. Subaru and the Center for Pet Safety will create standards for testing restraints, while announcing those that perform best.

The center, a non-profit research and advocacy organization based in Washington, is dedicated to companion animal and consumer safety.

The Center for Pet Safety conducted a pilot study which showed that the majority of pet safety restraints currently on the market do not provide acceptable protection in a crash situation, says Michael McHale, Subaru's director of corporate communications.

"As many of our owners have dogs, we feel it's our responsibility to help them keep their pets as safe as possible when they journey with us," McHale says in a release.

Of the four popular dog car harness brands, none held up in the tests. All of them demonstrated that they either could lead to plausibly serious or fatal injuries for not only the canine but the driver too.

Lawmakers in Subaru’s home state of New Jersey are the first to consider the requirement of pet restraints when riding in vehicles.

The center has received requests from all over the world from manufacturers who want guidance on developing a safer harness, says Lindsey Wolko, the founder and CEO of the Center for Pet Safety, which is not affiliated with the pet product industry.

“Through this partnership, we can finally conduct additional testing to help develop a suitable standard, provide the needed knowledge-base to manufacturers, as well as determine the top performers," Wolko says in a release.