Honestly, you can’t make this stuff up (unless you’re South Park creators Matt Stone and Trey Parker, of course), but there he was, Man-Bear-Pig himself, warning about herds of “spider-goats.”
Noting that spider silk is extremely valuable but difficult to produce in volume, Al Gore told SXSW Interactive interviewer Walt Mossberg that some industrious industrials have actually figured out a way to cross web-making orb spider genes with goats to produce “spider-goats.”
“These spider-goats secrete spider silk with their milk through their udders,” Gore told SXSW attendees, asking them, “Is everyone okay with that?”
When Mossberg asked him if he was for real, Gore added, “There are herds of spider-goats out there now.”
When Mossberg pressed him where these herds were located,” Gore glanced over his shoulder, adding, “right out back.”
Maybe it’s a good thing he hasn’t run for office again, and sold Current TV. That said, his new book, “The Future,” is bound to be a best-seller. Just don’t know whether it should be stocked in the fiction or non-fiction aisles. 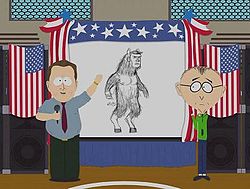 sxsw, sxswi
5 comments about "Man-Bear-Pig Vs. The Spider-Goats".
Check to receive email when comments are posted.
Read more comments >
Next story loading