Gore To Murdoch: You're Not In The Journalism Business, Properly 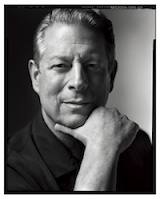 When SXSW Interactive keynote interviewer and Wall Street Journal tech journalist Walt Mossberg challenged interviewee Al Gore on his decision to sell Current TV to Al Jazeera, a media company controlled by fossil fuel producing state, Gore got a bit testy. So did Mossberg. At one point, Gore turned the table asking Mossberg why he works for a boss like News Corp. chief Rupert Murdoch, Mossberg noted, "But Rupert Murdoch is not in the oil business." To which Gore rejoined, "No, but he's not properly in the journalism business either." And now, following Current TV's sale to Al Jazeera, neither is Gore.

sxsw, sxswi
2 comments about "Gore To Murdoch: You're Not In The Journalism Business, Properly".
Check to receive email when comments are posted.
Read more comments >
Next story loading