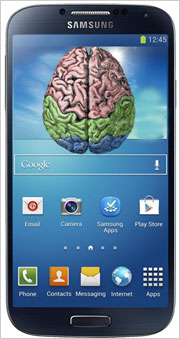 While the Apple critics have always cherished Samsung’s puckish needling of the previously sacred uber-brand in ads, it still seems to take a lot of media types by surprise that one of the largest electronics manufacturers in the world is Apple’s real chief rival. We have been writing in these pages for a long while about how the company already has traction in the TV space that Apple only covets. And Samsung began working on a content and cross-platform app ad network a long time ago.

But with the Galaxy S4, Samsung is most clearly leapfrogging Apple in moving the mobile device from being personal to being truly intimate. The upcoming handset’s emphasis on sensor technology to engage the user’s movement, eye-gaze, physical attributes, and gesture mechanics try to make the device something more than personal.

IHS analyst Ian Fogg put it well when he praised the company for grasping the next step that devices are bound to take. “By describing the Galaxy S4 as a ‘Life Companion,’ Samsung is demonstrating awareness of a fundamental truth about the mobile market: Smartphones are all about personal experiences that stay with people throughout the day, not only mobile ones.”

The S Health Features alone are an attempt to bring the technology into sync with environment (gauging your comfort level) and your activity. While some of these independent features already exist in a variety of health and activity add-ons, Samsung was smart enough to make them part of the identity of the hardware and promise to be the source of integrated software solutions.

Other sensors like the eye-gaze feature tie the hardware to a deeper set of physical behaviors than simply touch. Having the device know when you are looking away from a video in order to pause it for you seems itself like a little trick. But when you marry it with some of the many other sensors at work in this thing, from external light monitors to temp and barometric pressure readers, gesture tools, etc., you have a technology that is closer than anything we have seen before to attaching itself to one’s being.

Whether or not Samsung as a company is capable of following through on the promise of this technology is another question. They are not a proven content company generally, although the former head of AOL content David Eun is now working for them.

What is more interesting is that the Galaxy makes a brave stab at moving the connected device ever closer to the user’s being. Will people buy it? Feel comfortable with it? Find it as creepy as it may be helpful? A lot of that depends on how well Samsung executes both the apps and the education piece. I admit that I am not convinced they have the chops for that yet. But this is a glimpse at that next stage of mobilized technology. Sensors of all sorts -- able to travel with, monitor, instruct, interact with us on intimate levels -- are an inevitable next step.

If the first step in mobilization was merely extending the Web as we knew it to devices, then the second was developing contextual services that address new and specific use cases. This next step will involve blurring the line between media as we have known it and the human body and our minute-to-minute interactions with the world. The line between media and me will be erased. Media won’t just be something people consume. It may well be something we live, change, and inform just by moving, gazing, sweating, and sleeping.