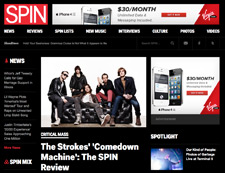 On the heels of cutting about a fifth of its workforce, pop-culture blog network Buzz Media is changing its name to SpinMedia, and completely rethinking its editorial and design underpinnings.

Along with “a new editorial vision,” the company is adopting a “completely new technology infrastructure,” according to CEO Steve Hansen.

Despite the shift, SpinMedia has shown growth over the past year. In 2012, the publisher of properties such as Stereogum, Celebuzz and The Frisky took in about $40 million in revenue. This year, it is on track to do about $50 million in revenue, according to Hansen.

Why, then, the need for such dramatic changes? The company is simply changing with times, Hansen said.

Beginning with Spin (once the property of Spin magazine, which Buzz Media bought last year), Celebuzz and a brand new site launching today, SpinMedia plans to unveil new editorial formats -- which, according to Hansen, will ultimately reshape all of the company’s brands.

Supported by a fresh $15 million in capital, the changes are designed to improve the consumer content experience and set new standards for “shareability, community and engagement,” Hansen said.

Founded in 2005 as Buzznet, Buzz Media has historically combined professional editorial teams with a heavy dose of reader contributions. This approach is still used to cost-effectively engage audiences across some 45 branded properties.

Despite such efforts, the company was forced to lay off about 50 of its 250 employees at the beginning of the month. When the news broke, Hansen predicted that the company would boast at least 250 employees before the end of the year. Last December, Hansen replaced longtime CEO Tyler Goldman, who then became executive chairman of the company.

Yet, some things remain the same with the company formerly known as Buzz Media. “What remains steadfast is the authenticity of our editorial voices,” Hansen said. "This will only accelerate.”