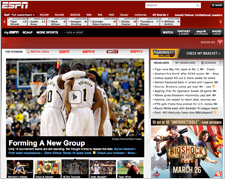 AT&T U-verse subscribers will have access to multiple ESPN networks live online under a new arrangement. The telco joins Time Warner Cable and Verizon, among others, offering the WatchESPN service so far.

The service is accessible on tablets, smartphones and to certain Xbox Live subscribers. WatchESPN is ESPN’s version of TV Everywhere. AT&T is making it available to TV customers receiving ESPN networks.

In addition to TWC and Verizon, Cablevision, Comcast and Charter are among those offering WatchESPN.

With WatchESPN, ESPN has blunted much of the value of ESPN3, a former cord-cutter’s delight -- a free offering to broadband subscribers with many of ESPN’s premiere events streamed live.

With a similar product for the Big Ten Networks available, it’s possible that Fox may look to launch a similar online sports hub once it launches its new flagship 24/7 cable sports outlet.

DirecTV and Dish Network offer the Big Ten service, but not the ESPN one. ESPN and Dish have an impending renegotiation of their carriage deal this year that could give the satellite provider’s customers access. How much operators pay ESPN to make WatchESPN available became an issue in a recent trial, where Dish sued ESPN claiming damages on a variety of carriage matters.