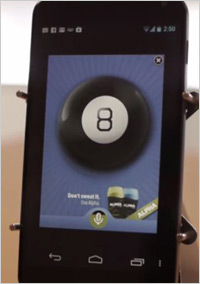 If a picture is worth a thousand words, what’s the value of a voice? That’s what Madison Avenue is about to find out as one of the biggest developers of voice and language translation technologies releases a new mobile advertising format enabling brands to literally talk one-on-one with consumers. The format, dubbed Voice Ads, is being rolled out by Nuance Communications, the same company that powers natural language voice programming for Google Voice and Apple’s Siri, and it’s already looking at applications for other media, including out-of-home and television.
The new mobile voice formats have already been beta tested by three major shops -- OMD, Digitas and Leo Burnett -- and have become part of the offering of one major mobile rich media advertising platform, Celtra.
The new formats overcome a major barrier for marketers seeking to reach on-the-go mobile media users, especially on small screens where text or even rich media banners just won’t cut it. Instead of relying on the screen to communicate, the ads enable brands to literally talk to consumers.
At least three major mobile ad networks -- Millennial Media, Jumptap and Opera Mediaworks -- have agreed to offer the Voice Ads formats.