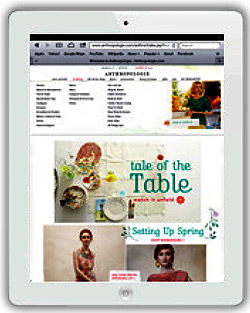 Tablets have emerged as the preferred mobile device when it comes to transactions. Estimated tablet transactions accounted for more than half (57%) of the nearly $25 billion in U.S. m-commerce last year, with that proportion expected to grow to 62.5% this year, per an eMarketer forecast in January.

Yet retailers have been slow to capitalize on the potential of tablets as shopping tools. According to a new study by digital think tank L2 examining 60 retail brands last month, only 13% support any touch-and-swipe functionality beyond scrolling on tablets.

Furthermore, less than 10% maintain tablet-optimized sites. On average, sites took more than twice as long to load on a tablet as a desktop PC. “Retailers overwhelmingly rely on desktop site architecture to drive the tablet experience,” stated the report, adding that only 7% use a Java-oriented platform like IBM’s WebSphere Commerce to serve content across different screen types.

The iPad was introduced only three years ago, effectively marking the start of the tablet era. PCs and mobile phones are still far more ubiquitous. But while tablet penetration in the U.S. stands only at about 25%, the study points out that figure rises to about 50% among households with annual income of $75,000 or higher.

To cultivate the growing body of tablet shoppers, retailers have to upgrade their offerings. L2 noted the checkout process is still often painful on tablets. One in three retailers don’t support shopping cart “continuity,” requiring shoppers to start over from scratch when switching devices before completing a transaction. Only a third (32%) support PayPal, and only 22% offer single-page checkout.

Retail checkout in tablet apps isn’t much better than on the Web. Only 10% of transactional apps offer an in-app experience from product selection to checkout, with the rest either redirecting shoppers to the browser for payment processing or a generic link to the brand’s e-commerce Web site, “bifurcating the app and site experience.”

Underscoring the shortcomings of retail apps, the L2 study noted that only 14 of the 60 retail brands researched had apps in the top 200 titles in the App Store (in the Lifestyle and Catalogs categories). Among these, L2 created a top 10 ranking, using the quality and quantity of app ratings as a basis for evaluation.

Leading the pack was Forever 21, followed by Victoria’s Secret, L’Occitane, Anthropologie and Urban Outfitters. Two patterns emerging among the top retail apps were a focus on e-commerce and frequent updating to fix bugs, enhance functionality and add new features.