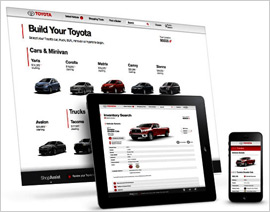 Toyota has redesigned its home page, Toyota.com, and made scalability to different mobile devices a priority. The redesign, for example, includes a new iPad app, which, per the company, is intended to expedite purchase decisions.

The automaker also says the site is especially designed to appeal to consumers who are between the ages of 40 and 60, and that the company's research suggests these people are among the fastest-growing demographics online, and are adept at toggling back and forth between screens -- mobile or otherwise.

Among changes to Toyota.com are long-form pages that scroll not just vertically, but also horizontally, which makes sense if you are using your fingers to swipe pages. There's also a "Shop Assist" feature  highlighting local specials, inventory and dealers -- easing the vehicle shopping process.

Jonathan Renker, account director, Saatchi & Saatchi LA, says the agency and client noticed that a lot of traffic to Toyota.com was coming from tablets, not desktops. "At one meeting [meta travel site] Kayak was brought up because they offer information based on tablet use, so we said 'why not build Toyota.com to make it tablet-optimized first?'"

He tells Marketing Daily that one virtue of the new design is that you aren't taken elsewhere when you look for specifics, you can just slide right or left, which is ideal for iPads or other tablet platforms. "You are still on that page," he says. For the desktop, the page has clickable arrows on either side of the page to facilitate scrolling.

Matt McKenna, SVP of national accounts at AutoTrader.com, tells Marketing Daily that automakers should be thinking along these lines a lot more as the Internet has changed shopping dynamics: as consumers get closer to purchase they actually widen their consideration set. "[Consumers} are doing research and shopping online and particularly on mobile devices," he says, adding that marketers have the opportunity to create a smooth transition from offline to online by making online efforts tout merits of the brand.

He says that of the 60% of the shopping process consumers do online, the biggest chunk is on third-party sites. The automakers' platforms, however, are number two, followed by dealers, search and other channels. An AutoTrader.com study found that 40% of shoppers who went to AutoTrader or sibling KBB.com also looked at new cars on the dealership Web site.