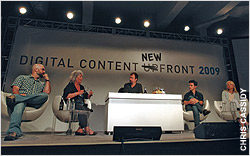 We hear about them more and more these days — those cord-cutters who have set sail from the expensive docks of traditional television and are waving from the shores of online video, happy, free, untethered, pockets heavy with saved money. The consumers who do opt to forgo the traditional TV model present a problem for content creators — namely, how to make money — or at least take some from television’s 70 billion-dollar-a-year ad revenue compared to digital’s 2 billion.

So while the TV advertising buyers are coming together in April in big hotel conference rooms in New York for the annual upfronts, across town an emerging conference is coming together for a similar event focused on the online video space that its presenters hope will one day rival the upfronts: the NewFront.

Started in 2008 by digital agency Digitas and spearheaded by then-CEO Laura Lang, currently the outgoing CEO of Time, Inc., the NewFront sought to create a marketplace for the growing segment of digital content that hadn’t found a home with marketers and advertisers.

“It started when we realized there was a burgeoning market of digital content creators,” says Lang, “There was no way to put that group of people together with brands and marketers. We said, ‘Wait, there is not a natural marketplace for this growing segment.’ It was very clear that people were consuming digital material. We wanted to show people it’s a future marketplace for digital content creations. A creation of a marketplace [was the goal].”

The first year’s NewFront, known as the Digital Content NewFront, brought together prominent digital content creation companies like MySpaceTV, MTV and the now defunct 60 Frames. The panelists were heavy hitters in the media industry as well, with then-Disney chief Michael Eisner and 60 Frames CEO Brent Weinsten, among others. After that, the panelist names got even bigger, drawing in people from myriad professions including Al Gore, Demi Moore and Subway CMO Tony Pace who all had one goal: monetizing their online video properties... at some point.

“The goal at the time was to increase awareness of ever growing content creation to help marketers and advertisers understand the role digital content could play. For Digitas, it was a chance to show leadership,” says Lang.

When Digitas opened the NewFront to other agencies in 2012, the event became an industry force with content flowing in from competitors like AOL, Microsoft, Hulu, Vevo, Yahoo and Google/YouTube.

This year, Digitas will completely turn over the NewFront to the Interactive Advertising Bureau and host its own presentation during the event. “All six of the founding partners — Digitas plus the five founding publishers — recognized that the enthusiasm of agencies and marketers would grow if the NewFront was fully understood to be a marketplace run by sellers for buyers: all buyers,” says Randall Rothenberg, President & CEO of the IAB. “So IAB’s stewardship is simply an affirmation of neutrality in support of a vital and explosively growing marketplace.”

Shira Lazar, cofounder and host of What’s Trending, a daily YouTube program, has been part of the NewFront since its inception: she hosted one of the first NewFronts and Digitas’ presentation again in 2011.

For online content creators like Lazar, the NewFronts are an opportunity to showcase their work and start a conversation with agencies about the online audience.

With creators engaging their audiences, better and more finely tuned content can be produced based on consumer taste and preferences.

“The creators today have built communications and brands through two-way conversations with audiences,” says Lazar, “It changes how we produce content for this generation. It changes how we create and broadcast content. We can be more creative.”

This is good news for advertisers. Online content creators will even say it’s better than the TV ad model.

“Community allows advertisers to engage in a conversation that a one-way TV broadcast can’t handle,” says Berger, “Traditional TV is still linear and has no interaction even with Twitter and Facebook engagement.”

Are the buyers buying it?

Everyone wants to know just how much, if at all, the NewFront will affect its perceived counterpart.

“The upfronts are much more rooted in the negotiation aspects — driven by the scarcity of TV inventory and the competition for it,” says Jessica Sanfilippo, Group Media Director, 360i. “The rules are clearly defined and the opportunities in the form of spots are straightforward. With the NewFronts, we as buyers are still being sold conceptually by the digital publishers on the value — and, if you factor in all video channels including UGC, the inventory is fairly limitless. So the NewFront conversation shifted to more of the uniqueness of the integration opportunities, such as branded video entertainment. In that sense, the flexibility of execution opportunities afforded by the NewFronts translates into some strong branding opportunities.”

To that point, it may not be fair to compare the NewFront to the upfront in the future.

Lang agrees: “It’s not clear that the NewFront will mimic the upfronts. I do believe they will take money out of the markets.”

But the general consensus in the media community is that no money has been shifted from TV to online video ad budgets, though no one is certain.

“I’ve heard there are ranges from a half billion dollars moved from the upfronts to the NewFront,” says Lang.

“We have seen our clients adopt online video, not as a replacement to TV, but as a complement and supplement,” says Sanfilippo, “Clients understand the opportunity that online video offers in order to tell richer, more interactive stories with the consumer that go beyond the 30- or 60-second spot.”

With the IAB taking over the NewFront in 2013, the event is taking shape as something not quite entirely different from its Digitas days, but still evolving in scope and sophistication. “We look at IAB merely as the maitre d’ at the hottest restaurant in town — the burgeoning upfront marketplace for original digital video programming, distributed at mass scale, but infinitely segmentable and intimately targetable,” says Rothenberg. “Our goal is to help the producers of the most exciting digital content establish a robust market where agency buyers and brand marketers want to shop.”

And as the NewFront evolves, “there will be a new wave of new stars and celebrities from the digital world in the coming years,” says Lazar.

But not so fast. While buyers may pack into every seat at the presentations and eat all the shrimp at the after parties, don’t expect money to flow as freely as it does at the upfronts.

“There is urgency behind the upfronts, whereas the NewFronts involve more time for clients to source on budgeting as they shape their investment opportunities,” says Sanfilippo.

Still, Lang is optimistic: “The real deals are always done behind closed doors and that will always be the case. It will happen at the NewFront.”