The View From the Stage 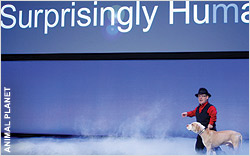 Mitch Oscar, a long-time agency executive, remembers Robin Williams taking the upfront stage to interest advertisers in a new series called Mork & Mindy.In full dress and playing his role as an alien, the comedian’s act included a prayer to the Nielsen gods.

“We all cracked up hysterically,” Oscar said.

Not all actors (or talent) sent out by networks to entice the buying community are able to bring the house down like a pre-movie star Williams. In fact, over the years, their appearances are arguably one of the main culprits why upfront presentations have lasted so many hours.

A standard has a network playing a clip of a coming new drama or comedy and then members of the cast coming out. A lead star basically says hello and thanks for your support. The rest just stand there.

Though there is always polite applause, after the routine happens for, say, the fifth time at a single presentation, some in the crowd might get a little antsy — assuming the actors aren’t well-known. In other words, not the Friends cast saying hello or a Kevin Bacon heralding a new TV role.

Advertisers may have gotten excited a few years back when the talent on NBC’s NFL coverage didn’t just appear, but tossed footballs into the crowd. There were only a few, though. Did advertisers wonder with all the money being spent, shouldn’t everyone get one in a goody bag?

In recent years, as reality
TV has boomed, “regular
folks” have been called on to entice advertisers — notably,
during presentations by cable networks. Discovery Communications, which doesn’t use scripted programming, makes particular use of them annually at its showcase at New York’s Time Warner Center.

Last year marked the first time Shorty Rossi, the star of Animal Planet’s Pit Boss, appeared before advertisers in the presentation (he had attended and mingled with them at post-event gatherings before). Like other actors and reality stars, he said he didn’t know what an upfront was before a briefing prior to his first one.

Now, he gets it, though. The attendees control billions of ad dollars that can impact a career.

“You can have the best show in the world and if you don’t convince the [advertisers] that it’s going to last for a while or the ratings are [going to be] great, you aren’t going anywhere,” Shorty said. “You can have the worst show in the world and have huge ratings and the advertisers are going to see that … they’re the ones that pay the bills, they’re the ones that pay my salary even though it comes from the network.”

Shorty didn’t just come out and wave last year. A clip introducing new show “Finding Bigfoot” ran and it seemed likely one of the stars would follow on stage. But, playing off the Bigfoot concept, Shorty emerged from a cloud of fog as the lights came up asking, “What did you expect, something bigger?”

He was holding pit bull Hercules. Dogs frequently make appearances in Super Bowl ads, so why wouldn’t they appeal to advertisers?

In that vein, Animal Planet tried it again last year with Tanked stars Brett Raymer and Wayde King. Like other network talent, they were scheduled to play a role in the next Puppy Bowl and came out with puppies and waved their paws.

Raymer said he and King do fine in front of crowds, but there were some nerves before going on. “Being a big part of the whole presentation was really exciting and just a fun thing, but when you don’t know what’s going to go on, there’s … a little bit of nervousness,” he said.

Fellow Discovery Communications star, Buddy Valastro — the Cake Boss who appears in an eponymous show on TLC — said he wants to appeal to two audiences: advertisers and his bosses. “I do feel a little bit more pressure on me because not only do you have [advertisers], but then you have all the people from Discovery and they’re great people … but you are still a little nervous because you still want to perform,” he said.

He’s been on stage multiple times — Discovery has presentations in New York, Chicago and Los Angeles — and said he once forgot his lines and “definitely got a little stage fright,” but improvised to the point he didn’t think anyone in the crowd noticed.

Speaking of “regular people” —  or ones that used to be  — Discovery authored one of the more emotional upfront moments in 2009 when Chesley Sullenberger, the pilot who landed the US Airways plane safely in the Hudson River, came out. TLC was announcing it would air a documentary about him, and the crowd gave him a sustained standing ovation.

Besides actors, network executives from sales to programming also appear on the upfront stage each year, and it’s important they be prepared for anything. Memorably, one year Mike Tyson appeared to introduce an Animal Planet show he’d be starring in, rooted in his love of pigeons. As he got going excitedly, he spoke about how he used to skip school while collecting them.

Animal Planet chief Marjorie Kaplan might have been a bit surprised, but she didn’t miss a beat after Tyson, seamlessly telling the advertisers, “We don’t support truancy, but this is going to be quite a show.”

Perhaps the best example of an executive acting extemporaneously with aplomb came in May 2011 at the Turner Broadcasting event. It was the upfront when the lights went out on Broadway (actually a few blocks away at the Hammerstein Ballroom). About 15 minutes into the show, an executive pointed the audience to a clip of a new comedy.

The screen was blank. And, it stayed that way for what must have seemed forever for the Turner bosses.

Upfront presentations are rehearsed, so when Steve Koonin, in charge of the networks presenting, realized some sort of power outage wasn’t in the script, he ran up on stage and offered a hilarious intro: “My name’s Steve Koonin, formerly of Turner Broadcasting.”

He proceeded to tell a series of jokes that killed time and just killed. At one point he said to advertisers, “Our pricing is not changing because of this.”

Upfront event schedules have moved over the years. In 2010, seemingly looking to take advantage of the popularity of Jersey Shore, MTV held an event in February not long after the show wrapped its first season. The cast didn’t take the stage, but was very popular when mingling with advertisers at an after-party.

Turner and ESPN have joined the broadcast upfront week, looking to persuade advertisers their value is on par with the Big Four.

In 2008, NBC sought to shake up the overall concept of a presentation, looking to emphasize NBC prime time along with other NBCUniversal assets. Instead of its typical Radio City grand show, it held an NBCU Experience — replete with the “Kitt” car, as a Knight Rider redux was on tap — in a tent at Rockefeller Center. There was also a party where Conan O’Brien did a bit, as he was readying to take over The Tonight Show.

The comedian riffed on NBC’s decision to try something new (or perhaps cheaper): “When I first started with this company 15 years ago … the NBC upfronts were held at prestigious Avery Fisher Hall. Remember those days. Then, they moved to historic Radio City, a beautiful majestic palace. Now, we’re all standing in a soggy tent outside the NBC store. I hope you’ll join us again at next year’s upfronts at the falafel stand on 49th Street.”

NBC traditionally had the prime lead-off position during upfront week on Monday afternoon when anticipation was high and advertisers weren’t tired of, well, largely unknown actors coming out and saying hi. In 2009, NBC held an evening comedy event after ABC’s Tuesday event and ceded its Monday spot.

Many would say that turned out to be major mistake. Fox pounced and has taken over the Monday spot. NBC has since returned with a Monday morning event, but no longer has the day to itself.

Needless to say, O’Brien is no longer in the spotlight at NBC, having been canned at the network. Turner, where he now hosts a late-night show on TBS, has called on him quite a bit, though, for laughs at presentations. (O’Brien had finished a bit just before the electricity problem in 2011.)

Perhaps, though, the most anticipated comedic performance of upfront week comes courtesy of Jimmy Kimmel, who annually pokes fun at the TV business at the ABC event, including his own network.

“He’s a highlight,” said Don Seaman, formerly of MPG and now at TVB. “Every single time I think he kills it.”

And … “Remember those shows that we were so excited about last fall? We cancelled all of them. And yet here you are again. I think you might have a gambling problem.”

Does ABC censor him? Basically, no, Kimmel told Kim Masters last year in an interview on her public radio show in Los Angeles.

“They forgot to look at my script the first year,” he wagged (or maybe not). “Nobody was paying attention to me and I wound up making fun of them and kind of everything and it went well.”

He added: “Luckily, I was able to kind of set a precedent, and now I think people expect it from me. And, by next year they should be pretty well sick of me.”

Not a chance, says Seaman. “He owns that crowd … maybe it’s just because he’s mocking us, which we seem to appreciate. That works really well.”

(One long-time agency executive said Kimmel’s funny, but it’s not in good taste to mock the hand that feeds you, so to speak.)

Speaking of ABC, Seaman said that the network played the full pilot of Modern Family as it was getting ready for launch at Lincoln Center and advertisers were very impressed. “The whole room just went: that’s a hit,” he said. “That was obvious. Perfect.”

The cast may have come out afterwards, but it sounds like the deal with advertisers was already sealed before Kimmel could poke fun at it.