Devices Getting 20% Of Search Budgets As Spending Soars 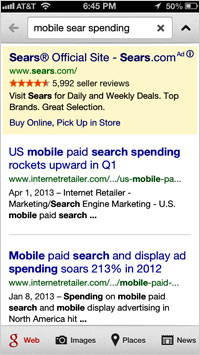 Google had good reason to institute its “enhanced campaign” model for blurring the lines between desktop and mobile/tablet search ad buys. It saw the numbers written on the wall -- budgets and behaviors are moving to mobile search even as their all-important cost-per-click rates on these devices still lag the desktop.

In its quarterly survey of client search spending across the major platforms and devices, The Search Agency reports that in Q1 2013 marketers spent 20.1% of their search budgets on smartphones and tablet ads -- a substantial 37% increase in share since the year-ago period. The actual spend on these devices has mushroomed 68% on smartphones and 135% on tablets over the last year, reflecting the velocity of the increase and growing perceived value of tablet advertising in particular.

In fact, CPCs for smartphones actually declined 10.4% year-over-year, while tablet CPCs went up 19%. The so-called “mobile discount” appears to be real when it comes to smartphones, perhaps reflecting the ongoing perception that smartphone clicks do not convert as well as desktop -- at least not in the conventional sense of leading to sales.

On Google, the average CPC for smartphones in Q1 2013 was down year-over-year from 65 cents to 58 cents, although the rate did come up from 45 cents in Q4 2012. Perhaps reflecting a drawback from the holiday shopping season where retailer advertising is strongest, tablet CPCs on Google declined from the previous quarter -- from 69 cents to 65 cents -- although it was up 18.2% from the previous year. Desktop CPCs continue to exceed devices on Google, at 74 cents in Q1 2013.

Media buyers are following user behavior. Devices continue to expand their share of search clicks. On Google, the share of search clicks coming from the desktop declined 13.6% from Q1 2012, from 83.9% last year to 72.4% this most recent quarter. Meanwhile, devices now contribute 27.6% of clicks on Google ads -- 16% coming from smartphones and 11.6% from tablets. Also on Google, the overall share of mobile impressions is slightly lower: 13.6% from smartphones; 9.5% from tablets and 76.7% from desktops.

But device-based impressions spiked considerably in the recent quarter. The Search Agency report expects an explosion in hardware sales over the holiday season. “As we predicted in our last quarterly report,” the report states, “smartphone and tablet clicks increased significantly after the holiday season. After a huge peak in smartphone and tablet sales during Q4 2012, advertisers took advantage of advertising opportunities on mobile devices, demonstrated by the substantial lift in impressions on smartphones and tablets. Going forward, we expect to see more clicks on tablets as advertisers ramp up their mobile advertising.”