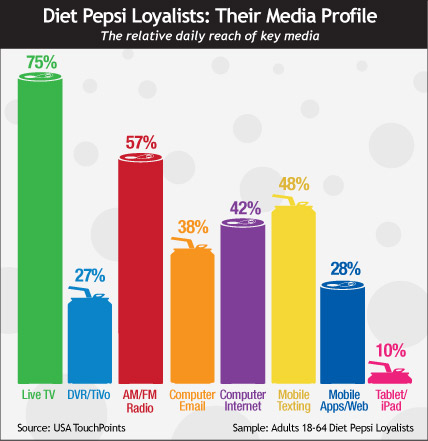 The carbonated drinks category is a fiercely fought sector in which consumer habit and loyalty is a key driver of success.  The category is so large that even when it is broken down by brand and sub-brand – of which there are many – loyalists for any sub-brand still number in the millions.  Understanding their daily media habits is critical in understanding how best to shape communications strategies.

This analysis leverages the fact that USA TouchPoints data is linked back to the MRI Codebook to enable analyses at the level of brand and category purchasers and consumers. It looks at the relative daily reach of different media among 18-64 year-old Diet Pepsi loyalists –—those who drink diet cola and who always choose Diet Pepsi.

The medium that achieves the greatest average daily reach is Live TV at 75%,  but the very respectable second place is taken by Radio at 57% — possibly because other analysis has revealed this group to be on the move a good deal of the day and as we know, radio dominates the world of in-car media.

While the Internet via the Computer comes in fourth place at 42% (lots of workplace consumption no doubt), it is sandwiched between two media often overlooked in the world of Big Media: Mobile Texting (48%) and Email via the Computer. Though neither are regulars on the media plan, their daily reach among Diet Pepsi loyalists – and probably other consumers of carbonated drinks – is too high to responsibly ignore.  Even though much of the email use will be work-related, there is ample evidence to suggest the mediums potential for consumer engagement.

Interestingly Texting delivers a full 20% more reach than the combination of Mobile Apps and Web – which may come as something of a surprise to many in the media industries who are more enamored and heavier users of apps and Web browsing on our phones. But that's not so forr the general population of Diet Pepsi loyalists.

Something similar may also be said for the reach delivered by the Tablet. While this can reasonably be expected to grow, at a mere 10% right now, it is unlikely to justify anything more than experimental activity.

Such an analysis could also be done in comparison to the sector as a whole or against specific competing brands and also to show how media use varies through the day and week. But as a simple check against which media are most likely to deliver brand loyalists on an average day, even this analysis shows up some potentially enlightening opportunities for developing differentiated channel planning strategies.