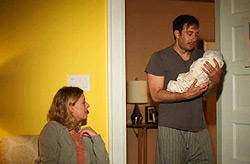 In the heart of the busy paint and gutter-cleaning season, True Value says it is introducing a new campaign to celebrate the emotional gratification that homeowners feel when they nail a new project.

The spots for True Value -- a Chicago-based hardware collective that competes with much larger chains, including Ace, the Home Depot and Lowe’s -- are themed “Behind Every Project Is A True Value,” and are an effort to break out of the category’s usual associates-in-smocks marketing efforts.

“We really wanted ads that would resonate with people who do their own projects, and the category is fraught with spots that are shot in the retail environment, full of smiling happy people wearing aprons,” says John Colasanti, CEO of Solve, the Minneapolis agency that created the campaign. “We thought it should be about what the brand helps the consumer do, and show how their lives were bettered. It's a very different appeal, and a very inward focus.”

It's the first campaign from Solve since it won the business back in February, and he tells Marketing Daily that it was important for the retailer -- which tends to have stores in more rural areas than some of its competitors -- to zero in on that deep emotional satisfaction people get from a DIY job well done. The campaign, running on national cable, Hulu and other Web sites, and which will also include print, is aimed at first-time homeowners “who haven’t yet fully developed their DIY style.”

In the first -- headlined “The value of showing off” -- a young man is throwing a party, and people gradually start sneaking away from the crowd to follow him into the bathroom. And no, there’s nothing illicit going on in there -- just a guy bragging about how he redid the whole bathroom himself. “I had to bust out the basin wrench,” he says. “It’s my favorite room in the house.”

In the second, called “The value of the right color,” a new dad is desperately trying to soothe a newborn, and finally figures out that it’s the too-bright yellow nursery making the kid wail. The couple then transforms the room with a more soothing blue.

The point, says Colasanti, who admits to feeling a tingle of pride whenever he mows his microscopic lawn, “is that there’s a higher benefit to a home project -- a truer value. There’s more going on for these people than simply crossing a chore off their list.”

True Value reportedly spends some $20 million on marketing each year.