ESPN Mulling Data Subsidies: The Return Of The Carriage Fee? 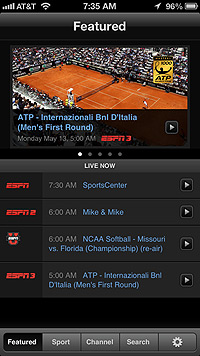 My guess is that the recent story in The Wall Street Journal about ESPN talking with a carrier about subsidizing wireless data plans isn’t going to go anywhere. The report says the sports network wants to ensure that its TV Everywhere viewers can access those data-hungry streams without data overage charges. Although a deal is far from imminent, the general idea is that ESPN would in some way subsidize customers on the network so that viewers would incur reduced or no charges against the customers' data cap.

The economics of this is hard to compute. The mobile channel is difficult enough for publishers to monetize, so turning around and paying wireless carriers seems a bit daft. Even a massively popular TV sports content provider like ESPN would have to do the math over whether adding convenience to its TV Everywhere model really is worth paying for. Presumably, the bottom-line cost of the subsidy could be reduced simply by making the deal into an ad revenue share.

Nevertheless, the fact that such a model is even being considered by a major publisher is worthy of note. ESPN, of course, would be the first to emerge in this discussion, since it is the first cable provider to offer almost all of its television live to mobile devices across its Watch ESPN app. And as we reported last week, parent company Disney ABC has already extended this model to some of its kids programming from cable, and may be previewing something similar for its network broadcasts this week.

As a content brand, you don’t want to be the service responsible for people incurring overage charges. But I have a feeling that no one knows for sure yet how much TV Everywhere really is pushing consumers over their data limits. After all, we do know that a lot of smartphone usage is going on in the home. So it is unclear to me how much people really are streaming TV outside of a WiFi connection.

The carriers, of course, would love everyone to think that people are banging their 4G networks to stream live games and 30-minute episodes. And after having been cut out of the mobile app economy pretty effectively four years ago, they are looking for any way to get back into this game.

The prospect of content brands negotiating special treatment over a wireless network raises all of the usual issues about Net neutrality. Beyond simple circumvention of data limits, there is the question of whether a carrier can enhance or degrade the performance of any given content brand on its network. To be sure, the carriers would love to see some model that resembles those leading halcyon days of the portal carriage fees of a decade ago. It has always been unclear whether any network or portal really gains a distinct advantage in the marketplace by getting special access to a specific content provider.

I think the problem of streaming media on limited data plans actually opens up more promise for sponsors to help underwrite specific programming across these networks. In fact, why couldn't advertisers be the ones to subsidize a higher-definition and bandwidth-hungry version of the stream for any given TV network or program? The broadcaster could offer consumers a more efficient but lower-quality stream, while the sponsor could get the benefit of having underwritten a demonstrable value at the consumer.

But I am not sure that anyone really wants to go down this path of having publishers getting unique rights on any given carrier. Do the carriers themselves want to be identified with going against the broader spirit of the Internet itself? And do they really want to open up a war in which a whole other set of providers -- namely the cable companies -- can start to play? I am already surprised at how much out-of-home WiFi access I can get simply from my Comcast Xfinity account. And AT&T’s WiFi network usually is free to my iPhone. Any attempt to privilege some content providers across certain cellular data networks is bound to open up another battle line that involves other providers of WiFi access partnering with competing content providers.