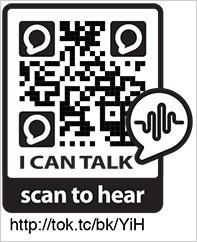 My first encounter with using gadgetry to enhance a moment or place was as a kid in the New York Metro area, pestering my parents to take me to the Bronx Zoo. The Zoo had audio boxes installed beside select animal cages, and a big plastic key (purchased at the gate, I think) would activate audio narration for that particular animal. Keep in mind that this was the mid-1960s. It didn’t take too much to seem magical back then. But this rudimentary idea of having electronic enhancements attached to something in the real world was a precursor to the power of mobile activations of objects.

The QR code is the ubiquitous and sometimes dubious example of a world that becomes clickable digitally with mobile media. Any place or object can get a layer of additional meaning.

The Bronx Zoo of my childhood came to mind when I came upon The Tokkers platform of what it calls “audio QR” codes. The self-serve platform uses a uniquely tagged QR code that has speech bubbles in its corners and the callout “I Can Talk.”

Technically, there is no special trick to all of this, really. Anyone can have their code link to a mobile site with an embedded media player. We already do as much with video, the most common use of activation codes.

The Tokker platform does strike me as a good evolution of the QR code because it builds into the code a specific consumer expectation on the deliverable. QR fatigue no doubt has set in among some users, who are now wary of scanning anything without good cause. The promise of an audio payoff seems especially compelling.

There is something uniquely intriguing about audio -- about an ad or a product that speaks to us via an app. In many of the examples Tokkers offers, this special quality is missing, since they link mainly to music samples or straight audio ads. It seems to me there is an opportunity to take a lesson from the animals at the Bronx Zoo and use audio to bring the user closer to the object, the moment, the place. Video is just video -- it is some variety of TV -- dramatic, funny, but also polished, performance-oriented, detached.

Audio personalizes because that voice that is detached from the video is much like the voice on the phone. It can talk directly to us without seeming fake.

Imagine if a QR code on a can of beans triggered on your phone the voice of the company CEO telling you that this can in your hand is made of this wholesome ingredient and that one. “And that is all that goes into our beans -- promise.” Or if a QR trigger gave the can its own voice and personality.

Mobile activations still seem to be anchored in Web mentalities -- serve a video, link to a site, share on Twitter and Facebook -- ho hum. But a mobile trigger on a physical object should be an occasion for reimagining what digital media does when these tools are tied to a very specific place, time and thing.

A dynamic between the device’s digital capabilities and the physical word becomes possible in ways that far outstrip the desktop. Bringing the Web and online advertising mechanics everywhere and anywhere seems a meager goal compared to being able to make bean cans…or animals…talk.