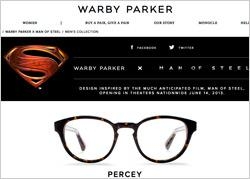 In its first partnership with a major motion picture, Warby Parker -- the online marketer of trendy eyeglasses -- has teamed with Warner Bros. for a promotional tie-in to the upcoming reboot of the "Superman" movie franchise, “Man of Steel.” The movie begins its run in theaters on June 14.

The deal, which was in the works for more than a year, was orchestrated by Omnicom Media Group’s Ignition Factory. OMG is Warner Bros.’ media agency.

Under the agreement, Warby Parker created two “limited edition” styles of “Man of Steel” glasses that are similar to the bookish-looking specs famously worn by Superman alter ego Clark Kent to disguise his real identity. They have a modern touch or two, such as a flash of color at the base of the temple.

The company created a special Web site to promote the new eyewear, as well as a Facebook and Twitter-based social media campaign. Fans of the movie and the eyewear company can enter a sweepstakes to win a free pair of "Man of Steel" glasses.

According to Marc Simons, Ignition Factory’s West Coast Director, the agency first met with Warby and the studio at a South By Southwest event in early 2012 designed to spark conversations between startups like Warby and potential partners like Warner Bros.

At that meeting, Simons proposed the Warby Parker promotional link with the film. It’s a tie-in that works well on several levels, said Simons. “Everybody knows that Clark Kent wore eyeglasses,” he said, “so the glasses tie-in is a natural fit and an easy thing for the consumer to understand.”

With Warby Parker, there’s also a do-good element that fits with Superman’s overall mission on earth. From its inception, Warby has donated a pair of glasses to someone in need for every pair it sells.

Warby’s "Man of Steel" site encapsulates the Superman saga, casting it as a story of choices. “Superheroes and mortals alike have the choice to use their power for good,” states the copy on one portion of the site. “So do companies.”

Warby, Warner and Ignition Factory reps left the SXSW meeting agreeing that some sort of Warby tie-in to the film made sense. A formal agreement was worked out in the following months, and specific details of the campaign were hammered out earlier this year.

“Superman is the original do-gooder, and eyeglasses are a defining part of Clark Kent’s iconic look,” stated Warby Parker co-founder Neil Blumenthal. For the "Man of Steel" tie-in, Warby is donating $15 for every $95 purchase to a New York City non-profit.

So far, the tie-in appears to be a hit with fans. One version of the glasses, called Chamberlain, has already sold out.