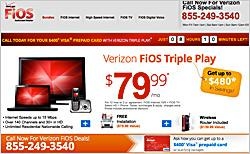 Verizon continues to become a greater player in the TV distribution business, boosting FiOS subscriber rolls in the second quarter by a larger amount than a year ago. The company saw net additions of 140,000 compared with 120,000 in the same period in 2012.

The increase moved FiOS to the 5-million-subscriber mark. It continues to trail Comcast, Time Warner Cable and the two satellite providers as the country’s largest operators.

FiOS revenues, which also include an Internet service with 5.8 million customers, jumped nearly 15% in the quarter to $2.7 billion. ARPU, which tracks the average revenue per customer, remained at $150-plus a month.

Verizon said it reached a deal to expand its TV Everywhere relationship with Disney, giving subscribers access to simulcasts in certain areas to their local ABC channel, along with the Disney Channel and ABC Family.

Verizon will also carry Fusion -- the joint English-language network targeting Hispanics from ABC News and Univision -- when it launches this year.

Disney has a separate deal with the National Rural Telecommunications Cooperative to distribute Fusion along with TV Everywhere products. The deal also covers the Longhorn Network and SEC Network.