Cheap At The Price: 90% Of Apps Now Free 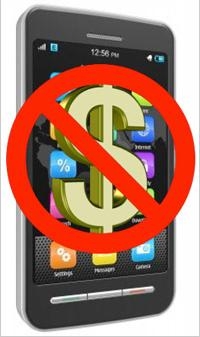 Here was the mobile pitch from carriers to media companies…circa 2007. Mobile is where you finally will make money because it solves all of the weaknesses the Web introduced to your business model. Unlike the Web, people are used to paying for additional services on their phones. The “free-for-all” sentiment of the Web is not familiar here. Better still, unlike a desktop world that struggled through micropayment solutions that never worked for publishers, the phone has a built-in payment mechanism -- carrier billing. But it gets better than that, Mr. Media Owner. We don’t charge for one-shot downloads. We have people subscribe for their content, so you will keep getting incremental monthly payments from many consumers long after they have forgotten they even downloaded your app.

Wow. Remember those days? Yesterday mobile analytics firm Flurry reports that the free download model is pretty much universal. Ninety percent of apps now in the Apple App Store have no price tag for downloading. This is up from 84% in 2010. That is not too surprising, given the popularity of the freemium model. Clearly, a good deal of buying is going on within “free” apps in the form of in-app buys. But the evolution in developer thinking toward that model is dramatic. In 2011, 15% of apps still were carrying the bare minimum price tag of 99 cents. This year, that share is down to 6%.

When it comes to overall average price for apps, Android users are less willing to pay up front even than Apple owners. On Android phones the average app price (as of April) was 6 cents, compared to 19 cents for the iPhone. The willingness for people to spend more on the iPad remains significant, because the average app price there is 50 cents.

Among those app that tested various pricing schemes, a very high percentage found via A/B testing that even the incremental 99-cent barrier was a significant impediment to reach. Most found that eliminating the barrier increased downloads dramatically enough to justify the free or freemium model.

Flurry believes that the overwhelming share of free apps in the stores implicitly validates the ad model. While gaming apps especially have found some success with up-front payment and in-app purchases, they contend that free is the real model for monetization here.