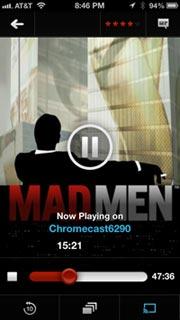 Google surprised most of us last week by launching its OTT dongle doohickey Chromecast as obvious competition with Apple TV and some kind of second run at the living room TV. I got a hold of a unit and got to play with it over the weekend. Some quick impressions of the down sides. Tomorrow the positives.

It is not as seamless an experience as Google would like us to think. First, the dongle does require power. So you plug this cute-looking fob into your TV or receiver HDMI port and you still need to manage another power cord. You need to be on the same wireless network in order for the thing to interact with laptops and devices, and this actually is an issue.

Most of the gadgetry in my home -- from laptops to iPhones and iPads, even the new Google Nexus 7 tablet Google sent for review -- work best on the 5Ghz band, which the Chromecast does not seem to recognize. Thus, in order for all the toys to play nice together the device need to throttle down to the slower and more cluttered 2.6Ghz band.

Basically, the Chromecast allows you to “throw” video and Web content to the TV from your device. When you are working with the specific apps like Netflix and YouTube on an iPhone, the throwing is as simple as tapping a box in the app that shows the available Chromecast device. Unfortunately, it doesn't always work. On Web pages especially, throwing from a Mac Air often had weird results. Pages would not load in the tab I expected or the screen on both PC and TV would hang for inexplicable reasons. Throwing from YouTube on a laptop gets quite confusing because there are multiple points of control -- in the standard YouTube player and in the Chromecast button. The buttons did not always have the desired effect.

The limited content available here is glaring -- especially considering that the two apps with meaningful cross-platform functionality are YouTube and Netflix. Anyone with a game console, Roku and most connected TVs already have this on an OTT system that does so much more for them. That Google let this one out of the shop without some better indication of what it might do in concert with a device (a game perhaps?) is pretty astonishing. Yes -- there is Google Play and its rich catalog of movies and TV. But having to discover the video you want on a device screen and then throw and control it from a device rather than the TV itself doesn't feel quite right.

It is an empty vessel waiting for more than rudimentary content support. Browsing from a laptop to a non-supported video source allows you to jerry-rig throwing any video source to the TV (if you put the PC player into full-screen mode), but the results in my perfunctory tests were marginal. Direct support is required here. Amazon Instant Video, for instance, was low-res and halting.

None of this speaks to the positives, of which there are many (check in tomorrow). But it does speak to how much this is a typical Google 1.0 product -- kludgy, waiting for developer innovation, coming from the same company that did so well with that in Google TV.