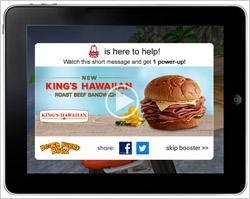 Arby's recently ran one of its largest social media/mobile-based games initiatives to date -- with exceptional results, according to the brand and its platform partner for the initiative, MediaBrix.

The game component was part of a broader campaign for two limited-time roast-beef sandwich offerings featuring buns made by King's Hawaiian, available during May.

While Arby's had done some game-oriented marketing previously, this effort's scale reflected the importance of this promotion, in partnership with King's Hawaiian (maker of the U.S.'s #1 branded dinner roll and other Hawaiian-recipe foods), as well as the need to quickly generate mass awareness for the limited-time offering (LTO), says Mary Ellen Barto, VP, media impact, Arby’s Restaurant Group Inc.

As a major QSR brand, Arby's' marketing/advertising campaigns are always designed to reach a fairly broad audience; however, they "skew a bit" in terms of age and gender demographic targets, depending on the product being promoted, Barto tells Marketing Daily. In this case, a core target was married adults age 30 to 45, with children.

"People tend to think that game playing is largely a young-male activity, but it depends on the game" -- adult females, and males, are primary player bases for a number of online games, points out Barto.

Furthermore, Arby's views online games as a major opportunity within the important digital initiatives in its overall media mix, because games enable the brand to interact with consumers while they're highly engaged, Barto says.

In this case, Arby's employed interactive ads to reach its audience via Facebook, mobile and the Web, through targeted social and mobile games within MediaBrix's network.

Ads were delivered via two different MediaBrix platforms, during two different "breakthrough moments" as people were playing their games -- moments when people tend to be most receptive to brand messaging and interaction, according to MediaBrix.

When game-players won a level or reached a high score, they saw congratulatory ads/interaction opportunities from Arby's, via MediaBrix's Flex product.

And when they were at game-playing junctures where they needed "rescues," they saw Arby's messaging offering virtual goods assistance, via MediaBrix's Views product, in return for interacting with the brand. (For example, when a player needed help reaching the next level on Beach Buggy Blitz, a top-10-ranked mobile/tablet game, Arby’s offered an opportunity to upgrade their buggy in exchange for watching its King's Hawaiian Roast Beef sandwich video message.)

The games advertising component was a major contributor to making the Arby's/King's Hawaiian sandwiches one of Arby's most successful LTOs in recent times, according to Barto.

The campaign also included national television advertising; banner ads across site networks and DSPs for mass reach; rich-media ad formats on premium sites (in this case, including Bleacher Report and Meredith Corp.'s food-oriented sites); public relations/media outreach; and messaging and interaction on Arby's' owned social media, including its Facebook and Twitter accounts, according to Barto.