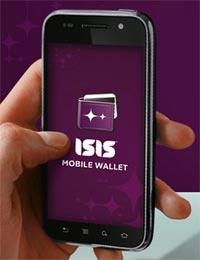 After nine months of trials in the Austin, Texas and Salt Lake City, Utah markets, the long-awaited mobile wallet solution from the carrier-backed ISIS consortium is ready for wide distribution, the group announced today. The system allows users with “ISIS-Ready” phones equipped with Near Field Communication (NFC) chips as well as a SIM-based secure element to make payments at contactless payment terminals. The joint venture of three major carriers (AT&T Mobility, T-Mobile and Verizon) cites recent research from Aite Group projecting that there will be 1.3 million locations in the U.S. that will be able to handle contactless payments by the end of the year. ISIS says the nationwide rollout of the mobile wallet will take place later this year.

Currently there are 35 devices across these three carriers that support ISIS. But in its announcement the group stated: “support for iPhone, Windows Phone and BlackBerry 10 is expected to be introduced later this year.” The iPhone is a curious inclusion, given that Apple has made no announcements surrounding the addition of NFC chips in the next model of the iPhone, expected to launch in September.

The ISIS group had been conducting trials of its mobile wallet solution in Austin and Salt Lake City throughout this year. They say that they have learned a great deal from early user behaviors. Among the findings, they found that wallet users tapped to pay more than 10 times each month. But more than 80% of these transactions were taking place at quick-service restaurants, coffee shops, gas stations, convenience and grocery stores. Many analysts have contended that consumers will ease into the idea of mobile payments by testing them themselves with small purchases. Earlier this year, Berg Insight claimed that of the 7.5 million mobile wallet users in the U.S., 7 million of them were using the Starbucks app to pay for coffees and lattes.

One of the big hurdles for mobile wallets is moving beyond simple payment, which is not much more convenient than using a credit or debit card anyway. In the trials this year, ISIS says that two-thirds of the active users had opted in to receive offers and messages from favorite brands, and that on average these users followed seven brands. Jamba Juice claims that its mobile wallet offers program drove incremental foot traffic as well as increasing the frequency of store visits. “We are now making plans to expand nationally with Isis so that all our franchisees can enjoy the benefits we have seen in our pilot markets,” said CEO James White in the announcement.

Coca-Cola also said that in the Austin test a promotional program had succeeded in getting a third of ISIS users to load the My Coke Rewards card into the wallet, 90% of whom were new to the loyalty program. ISIS says the wallet users who did engage in loyalty programs and special offers tapped to pay up to two times more frequently than those who were only using the system to make mobile payments.

ISIS says that 25 of the top 100 national retailers already have deployed or will be deploying contactless terminals. ISIS has secured agreements with all of the major credit card companies to support the system. The joint venture, while backed by three of the four major carriers in the U.S. (Sprint is a notable holdout) comes into a field cluttered with startups and alternative mobile payment solutions such as Square, Intuit, Google, and PayPal.

Mobile payments have been slow to gain traction with consumers and erect a viable infrastructure, despite early promise. In June, Gartner lowered its forecast for m-payment growth by 40%, citing slow NFC adoption and poor execution of early rollouts of non-NFC solutions. Nevertheless, the forecaster projected a market worth $721 billion in transaction by 2017.