Inspire Me: Mobile Social Nets Are In Style Among Prestige Brands 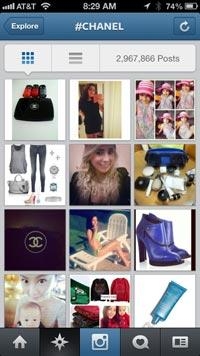 It is not surprising that the visually oriented mobile social networks such as Instagram, Vine and increasingly, Pinterest and Tumblr attract fashion and accessories advertisers. But a new report from L2 illustrates just how deeply many of these brands have embedded themselves in the mobile social nets and the kinds of returns they might see.

Mobile social nets clearly represent areas of tremendous growth, but each of these networks seems to have its own character and penetration among different groups. Instagram has enjoyed a massive 900% increase in its user base in the last year according to L2, but its demographics most closely resemble Pinterest. Seventy percent of its base is female, just slightly behind the 80% female skew at Pinterest. Tumblr, on the other hand, is more evenly distributed across gender, while Twitter still skews considerably male (62%).

L2 calls out specific brands that are strong among some of these networks. On Instagram, lululemon athletica, TopShop and Michael Kors have a strong presence. But L2 points out that because of the ways in which Instagram is distributed often through hashtags, some brands can flourish here even without a dedicated presence. “Chanel has garnered the highest number of user hashtagged photos despite having no presence on the platform,” the report states. By our own count there are nearly 3 million posts on Instagram tagged “#chanel.” L2 calls the Facebook acquisition of Instagram one of the best tech purchases of the last five years.

L2 calls out Urban Outfitters and Burberry as strong presences on Vine. Despite a recent challenge from Instagram in the short video format, L2 says branded Vines are more than four times more likely to be shared than other brand videos.

Part of the secret sauce of mobile social networks is that they tend to be visually oriented. L2 says that Instagram in particular and other visually based social nets get 25 times the engagement of more community-based platforms. They cite an instance where lululemon athletica saw conversions double when it linked its #thesweatlife Instagram image gallery to its product pages.

The visually based social networks are not only different in format but also distinct in content largely because they are both visual and mobile. People tend to post scenes, circumstances and visual encounters that inspire them. There is a difference in tone and mood to the social networks that makes them more conducive to the sorts of inspirational and aspirational qualities found in traditional prestige brand advertising.

This ethos of the mobile social networks may of course change over time as all of us embrace the mobile camera in these networks as tools for self-expression. But for now, they stand out in our media consumption as havens of more positive and entertaining content than many of the more traditional desktop social nets.