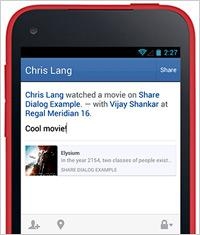 With its dramatic shift to a mobile-first focus, Facebook has emphasized the value it places on helping developers use its third-party platform to build out and distribute their own apps.

With Open Graph built into apps, Android developers can allow users to share information back to Facebook about specific actions they are taking through the app like “watching” a TV show, “listening” to music or “cooking” using a new recipe. “Developers can now directly create Open Graph objects, and no longer need to host webpages with Open Graph tags,” stated a blog post today by Facebook software engineer Chris Lang.

Perhaps of most interest to brands and marketers is the expanded analytics and targeting available through Facebook new Android SDK. Prior versions allowed developers and advertisers to track installs from its popular app install ads. Now, they will also be able to measure pre-defined actions within an app such as “add to cart” in a commerce app or “level achieved” in a game.

By tracking these and other custom “app events,” brands will gain a better understanding of what’s working and what’s not in their apps, which in turn could lead to better return on investment from mobile ads run on Facebook. The company said it plans to continue improving in-app analytics and developing related new features over the next several months.

Through the update, Facebook is also extending its Custom Audiences program for retargeting to Android apps. “With this feature, you can reach people who have taken specific actions in your Android app (such as installs or purchases) by defining an App User ID, and uploading this encrypted list in to our ads tool as a custom audience,” wrote Lang.

During its developer conference in April, Facebook had released a new SDK for iOS devices as well as a new partner program to help developers integrate Facebook on different mobile platform. Vendors participating in the program include Corona Labs, Kinvey, StackMob and Parse, which Facebook acquired the same month to help developers build apps.