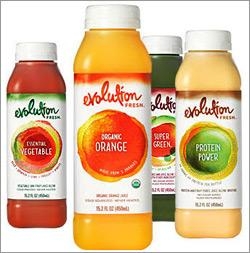 Starbucks has been expanding the Evolution Fresh brand's distribution since it acquired the business in late 2011 for $30 million. The juices are available in some grocery retailers and some Starbucks stores on the East and West Coasts, as well as in Evolution Fresh retail stores (there are three in the Seattle area and one in San Francisco, to date).

The Whole Foods deal means that the pricey, cold-pressed brand (which sells for $2.99 to $6.99 for 15.2 fluid ounces) will now have nationwide distribution. The plan calls for Evolution Fresh to be in about 8,000 Starbucks and grocery locations by year-end.

Following the Evolution Harvest snacks' debut in Whole Foods, Starbucks will launch them in all of its U.S. stores. Snack bars will be introduced in early September, freeze-dried fruit in late September, and trail mixes in October.

The super-premium juice category is a $1.6-billion market.