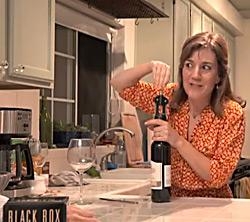 Black Box Wines is running a series of online videos that provide a humorous take on why you should convert to Black Box.

The wine company enlisted actors from LA’s famed Groundlings Theatre to help create five witty sketch videos that range from showing the dangers of drinking a glass of wine while on a slip ‘n slide to the extreme cork frustration that can come with opening a bottle of wine.

The videos were released weekly at 5 p.m. PST starting Aug. 15 to coincide with Black Box Wines’ summer “Lose the Bottle” TV advertising campaign (which aired through Labor Day), and “Lose the Bottle Essay Contest” on Facebook where Black Box Facebook fans are eligible to win up to $2,500 for sharing their first “I Lost the Bottle” narrative.

The brand is also engaging fans on Facebook by asking them to vote for their favorite photo from an array of 100 fans who received a special t-shirt for being among the first 100 to share their #LosetheBottle story and are now in the running to receive a $500 prize.

Black Box will be choosing the winner on Sept. 24 and they are asking Facebook visitors to let them know who you think should win by liking your favorite photos.

The brand’s Lose the Bottle campaign is designed to encourage wine drinkers to lose their bottle in exchange for Black Box’s many quality and convenience benefits: The wines are high-quality, award-winning and are a great value -- with each 3L box holding the equivalent of four bottles of wine -- and stay fresh for one month post-opening.