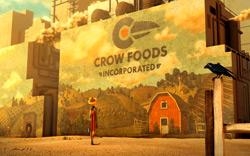 Chipotle's three-minute animated video, "The Scarecrow," has generated over 5.5 million views (still rising rapidly) on YouTube since it was posted on Sept. 11 -- a viral home run that would be envied by any brand. And one that was achieved without spending a dime on television or other paid media.

In case you've been incommunicado for a week, the background: The video was created as a trailer for a free iOS game that enables players to earn buy-one, get-one-free deals on certain Chipotle menu items. It takes on processed food with its story of a dystopian world in which a scarecrow is forced to work in the factory of fictional industrial giant "Crow Foods," but ultimately rebels, to produce and market his own, farm-grown food. Message: "Cultivate a better world."

The short film has drawn mostly rapturous praise from the marketing community for its emotional power and feature-movie-quality production values.

Gawker's Neetzan Zimmerman gushed: "With Oscar-ready animation from the acclaimed visual effects wizards at Moonbot Studios set over a score of Fiona Apple covering ‘Pure Imagination’ from the 1971 cult children's film ‘Willy Wonka and the Chocolate Factory,’ is it any wonder that Chipotle's 'stealth' promo for a free iOS game is already on a fast track to become one of this year's most successful marketing campaigns -- all [while] barely mentioning the word ‘Chipotle'?"

Indeed, the minimalist approach to branding -- Chipotle's logo appears only briefly at the end of the video and in the game's introduction -- is the core of what many assess to be a brilliant, ground-breaking example of content or "narrative" marketing. The point of which is, of course, to create viral impact for a brand through messaging or causes that resonate with consumers averse to traditional marketing tactics.

Mark Crumpacker, CMO of Chipotle -- whose brand promise is that it's [fast] "Food with Integrity" -- summed up the new campaign's strategy in noting to USA Today that Chipotle is "trying to educate people about where their food comes from," but Millennials (Chipotle's core target audience) "are skeptical of brands that perpetuate themselves."

"The more people learn about where their food comes from and how it is prepared, the more likely they are to seek out high-quality, classically prepared food like we serve in our restaurants,” Crumpacker elaborated in Chipotle's release about the campaign. "We created 'The Scarecrow' game and film as an entertaining and engaging way to help people better understand the difference between processed food and the real thing."

Chipotle's Twitter account is currently showing tweets from the likes of actor Elijah Wood -- who includes a link to the video, which he describes as "a beautifully animated piece with an inspiring message." Not surprisingly, this was retweeted by Chipotle.

The video has driven uncounted shares and comments across the social media world -- not surprisingly, both lauding and taking issue with its message.

Many in the agricultural community contend that the video's portrayal of farming practices is inaccurate, misleading or even unethical. And some have pointed out that while Chipotle uses locally- and organically-grown food sources and "responsibly raised" beef/chicken/pork "where possible," it also uses conventionally farmed/raised  food sources as necessary.

But as branding writer/teacher David Vinjamuri noted in Forbes, "Chipotle is more interested in influencing mainstream food production methods and eating habits than remaining ideologically pure," and it realizes that the stronger the outcry is from people who detest the story they’re telling, the closer those who agree with them will align to the brand."

Vinjamuri also points out that using "narrative" to transmit brand values and relying on social sharing to connect the message to the brand "ensures that nearly every view of the video is driven by a recommendation, which dramatically increases engagement."

The question debated by all marketers, of course, is how "sticky" or effective such exposure and engagement are when it comes to creating and cementing brand loyalty and -- ultimately -- driving sales.

According to YouGov BrandIndex, Chipotle's brand awareness score ("Have you heard anything about the brand in the last two weeks?") among the U.S. population was at 64% as of Sept. 7, jumped to 70% on Sept. 12, but was back down at 60% as of Sept. 17.

Those numbers, of course, reflect only a few days' window.

Chipotle did, famously, run its first anti-industrial food-sourcing video (which was also its first national TV ad), “Back to The Start,” on the 2012 Grammy Awards broadcast (which pulled nearly 40 million viewers), after posting it on YouTube in August 2011 and running it in some 5,700 movie theaters in fall 2011.

That exposure -- not to mention views of the video on YouTube (at 7.8 million to date) -- presumably made some contribution to its subsequent performance: In Q1 2012 (the quarter in which the video aired on TV, also helping to drive YouTube views), Chipotle's systemwide revenue jumped 25.8%, its comparable-store sales jumped 12.7%, and its net income soared 34.9%.

In short, the exposure and engagement yielded by these videos, however massive (especially when media coverage is thrown in), are still only pieces in a successful,  ongoing strategy that, as MarketProfs chief content officer Ann Handley stressed on LinkedIn, tells Chipotle's "bigger, customer-focused story" or mission "relentlessly and unwaveringly."