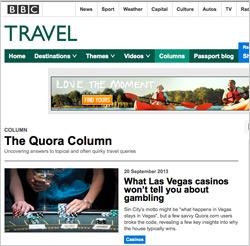 BBC.com and question-and-answer service Quora launched a trial Quora column over the summer fielding questions and topics posted by readers, editor Allison Busacca and the Quora community. Based on that experiment, the companies are now expanding the partnership to other sections of BBC.com.

Customized versions of the Quora column now also appears on BBC Autos and BBC Capital, with plans to extend it to other verticals within BBC.com in the coming months.

Within the autos section, the initial topic seeded by Quora looks at people’s biggest fears around driverless cars. In BBC Capital, the column kicks off with by exploring “the craziest things people have ever said or done and still landed the job.”

A BBC spokesperson said the publisher is using Quora to help identify subjects and writers that connect with readers. The travel section this summer tapped the Quora’s community of expertise, for instance, to unearth secrets pilots don’t tell passengers and highlight the best countries to travel by train.

Quora columns were among the top five most read travel stories in July and August, indicating the positive reader feedback that led to BBC.com rolling out the feature more widely.

Quora, which boasts covering 400,000 topics within areas like business, sports, politics and politics, has previously teamed up with publishers, including Forbes.com and Slate. The content on those sites draws directly on what the most popular Quora topics are at a given time.

Launched publicly in 2010, Quora has raised a total of $61 million to date from investors, including Benchmark capital, Peter Thiel, and Matrix Partners. The company’s business model is still a work in progress, but by broadening its distribution through established publishers like BBC.com it can expand its user base and sell that audience to advertisers