Once More To The Breach: Kindle HDX's Full-Frontal Assault On iPad...Again 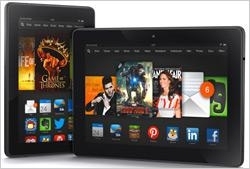 For the third holiday shopping season in a row, Amazon comes at the iPad with the Kindle brand. This week the company rolled out the Kindle HDX successor to last year's 7-inch and 8.9-inch models. The spec race is a bit tiresome at this point, and I am not sure that they really register with most consumers, so I refer you to the marketing page at Amazon for the geek speak.

Suffice to say that Amazon is blasting the HD message across all sense points -- from higher pixel density to lusher sound, faster processors, lighter designs, etc. Considering the success of the iPad Mini last holiday -- despite some of its technical lapses compared to Google Nexus, Kindle HD and even the Nook -- I am not convinced that many tablet shoppers are comparing specs, really.

Amazon seems to be coming at Apple this year with a surround-sound scattershot approach designed to capture different consumer and tech press segments. It issued multiple press releases, including a rundown of the feature set in “14 Tweets.” Everything from 11-hour battery life to a major upgrade of the Fire OD, now dubbed “Mojito” (because the tech press loves those Android build names, I guess), to colored covers to video and second-screen tricks are all called out in the hopes that some combination will cut through the tablet war noise.

Which is not to say some of this stuff isn't interesting.

Kindle wants into the “game” this year -- now touting its 4X improvement in graphics co-processing and 2X internal memory. Amazon finally clicked on the top-line reality of tablets -- they are gaming machines. The new Mojito OS adds cloud services along with recommendations for which apps to archive in order to save storage space. There is gesture-triggered task-switching, and the intelligent OS prioritizes in the carousel apps you use most frequently. Amazon aims for wider functionality and appeal with native Android support so most apps for the Google OS will run on Kindles without much or any modification. HTML5 is also supported to accommodate Web apps.

Of special note are the second-screen capabilities of the new OS, which finally take advantage of Amazon Video's presence on set-top boxes, smart TVs and game consoles. Starting with the PlayStation family and Samsung TVs, Kindle HDX units will be able to run second-screen commentary and control the video while you watch on the larger screen. Amazon already has an “X-Ray” feature that enhances books, music and video with annotations, so it has already been building content for this system.

Given Amazon's persistent caginess regarding the actual sales figures for the Kindle line, it is still difficult to assess how much of a splash the company has made in the market. In the most recent IDC breakdown of tablet market share Amazon Kindle didn't even appear on the top 5 list because the brand had fallen to sixth place, according to AllThingsD. Still, sales patterns for Kindle are harder to judge, since they appear to be highly concentrated in the gift-giving season.

While Android as a whole has made big market share inroads against the iPad in the last year, that is not to say that any single manufacturer like Amazon or Samsung have helped define a distinct and appealing alternative to the iOS ecosystem. My guess (but I think we need some research here) is that people choose not to get an iPad for a range of reasons that only further fragments the endemically fragmented Android platform. Many will chase price and look for cheap entry into tablet-land, while many others, I think, are looking for an e-reader with benefits or a simple browser.  In defining a tablet app market at least, I suspect the iPad will remain the king of the road for a while.