Travel is among the most invested verticals when it comes to programmatic display trading, according to new data from IgnitionOne. Travel has outperformed other verticals year-over-year and has increased spend in programatic display by 90% compared to this time last year. The vertical has also seen increases in clicks (105%) and impressions (79%).

The data comes from IgnitionOne, which today released a Q3 2013 digital marketing report. The report touches on U.S. programmatic display data and highlights the Travel and Retail verticals.

Compared to Travel, the Retail vertical saw modest increases across the board. Spend is up 9% compared to this time last year, while clicks (5%) and impressions 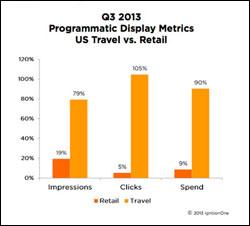 Reinforcing the investment in programmatic by the Travel vertical are ChoiceStream's monthly Audience Cost Calendars. The Cost Calendars are monthly data reports on the relative cost of trading between segments on real-time bidding (RTB) exchanges.

Throughout the summer months, Travel -- which ChoiceStream actually breaks down to specific locations rather than lumping it all together -- was routinely among the most expensive segments. The company's latest Cost Calendar was no different.

"Travel segments continued to be strong performers both in ranking and in average cost index," stated Bill Guild, vice president, product management and marketing at ChoiceStream, on the latest Cost Calendar. According to ChoiceStream, the top Travel segments in August were Canada, Italy, France, UK, South Pacific, and Australia & New Zealand.