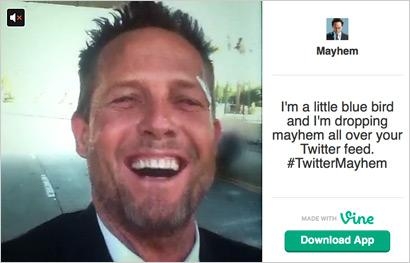 Allstate is dropping Mayhem all over Twitter via @Mayhem.

Built on spontaneous appearances, @Mayhem will allow fans to interact with Mayhem in a new way by capitalizing on real-time events, both planned and unplanned, and live tweeting to followers during unexpected moments.

“The instantaneous every day, every minute nature of Twitter is perfect for Mayhem,” says Lisa Cochrane, senior vice president, Allstate integrated marketing communications, in a release. “Mayhem, like Twitter, is everywhere all the time, and Allstate’s use of @Mayhem is a constant reminder that the good hands of Allstate can protect you from the uncertainties of life.”

Starting Sept. 30, on the @Mayhem Twitter handle, Mayhem will start deliberating which persona he will take on in the campaign’s new college football spot. And only his followers can help him decide which commercial will air on Oct. 5, during college football programming.

Activated by long-time ad agency partner Leo Burnett, @Mayhem will have scripted story lines that take place over several days. Built on spontaneous appearances, @Mayhem will provide opportunities for fans to interact as the stories unfold. @Mayhem will capitalize on real-time events, both planned and unplanned, by live tweeting to fans during unexpected moments.

In 2010, the agency had no idea where social was headed, says Susan Credle, chief creative officer, Leo Burnett.

“But we did know we had an idea that could be expressed across channels,” she says. “Mayhem is social by design. We have been careful to make sure we understand the voice of the character and how that voice works with the brand. Facebook was a terrific platform to find that voice. And now we feel confident about embracing the open platform of Twitter.”

@Mayhem is another way for Allstate, in an entertaining way, to educate people about how to make sure they are protected from life's uncertainties, she adds.

With more than 1.6 million Facebook fans, Mayhem has been known to take credit for “accidentally shutting off the lights during the Super Bowl,” being the “meeting after the meeting,” and even being the cable guy that arrives between “9 a.m. and Friday.”

“Given the real-time nature of Twitter, this platform naturally lends itself to real mayhem which may or may not have been created by @Mayhem,” Cochrane adds.