Google, Facebook And Yahoo Far Ahead In Mobile Reach 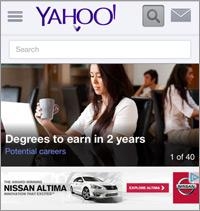 Yes, Yahoo. I was a bit surprised by comScore’s Mobile Metrix numbers for August, but mainly because I missed the July release, which started reporting more detail. In addition to the usual smartphone sales and OS shares, the Mobile Metrix charts released outside of the customer base are now reporting app and mobile Web + app reach. In the latter category, Google, Facebook and Yahoo are the clear leaders -- well ahead of Amazon, AOL and Apple.

Considering the public repositioning of Yahoo as a more mobile-friendly platform, it is surprising to see how much their underrated Web throw weight carries over to a mobile platform where many other players have had higher profile success. On the app side, the company probably still underperforms its potential. The Yahoo Stocks app shows the continued strength of the Yahoo Finance vertical, always one of their strongest suits.

The comparison of App to App + Web reach is a testament to the importance of a blended strategy to platforms. The mix of publishers being discovered on the mobile Web is much more diverse than in the App Store. Turner Digital (including CNN), CBS (which includes CNet and TV.com) and fashion and beauty blog aggregate Glam as well as Wikipedia pop into the mix.

Most impressive is the sheer reach the mobile ecosystem can achieve among smartphone-owning audiences. Even as the mobile medium is an engine of fragmentation and personalization, there are still major media properties capable of addressing a large portion of that audience, in some cases larger portions than any single TV network.

comScore also reports that smartphone penetration itself has surpassed 60% in the U.S. in the 3 months ending in August. The ongoing war of operating systems gives a win to iOS, which advanced its market share 1.5 points to 40.7% even as mobile shoppers awaited the iPhone 5S and 5C models. Android continues to reside on the majority of smartphones (51.6%), but it did lose .8 point in the three-month averages. Considering that phone industry analyst Canaccord declared iPhone 5S the bestselling smartphone all four major carriers in the U.S. in September (with the 5C in second or third place), we would expect iOS to make even greater share gains in coming months.

Finally, for all of the gazillions Microsoft must be paying for those relentless Windows Phone/Nokia TV spots, the company only budged the U.S. market share needle a hair, from 3% to 3.2% since May. You can only watch an iPhone-sporting granny head-butt an aging Android-wielding tech geek while the cool parents lay back and zoom in so many times before it becomes just another cue to grab your iPhone or Android to do a quick email check.