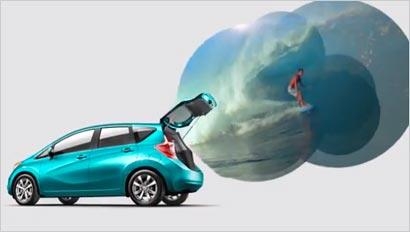 Nissan is continuing its campaign for the Versa Note compact with a pair of social media campaigns continuing its message to Millennials that the car is "Your Door to More."

Exhibit A is "Passion Genome" Facebook platform with a site with a DNA motif that serves as a tool (and was created by Tool) to connect people with their interests. That theme ties into the Versa Note marketing message that the car allows younger people to expedite their passions, whatever they might be.

The site itself lets you create a "Passion Portrait," a visualization in superstring-type visuals which can be shared on Facebook and Twitter using #MyPassionPortrait for a chance to win a $1,000 gift card from Amazon.com.

Erich Marx, director of interactive and social media marketing at Nissan's North American operation, says the idea, brought to the company by longtime agency of record TBWA\Chiat\Day, allows Nissan to align the car with a cool project that fills a need on social media channels.

"I probably have 400 friends on Facebook, but most of us can't possibly keep track of all the ways that we connect and all the shared passions we have with friends, so we built an app that lets you categorize by movies, say, or TV, or sports, or food and wine where you can create a 'genome' of all the things you like and connect with friends who like those too," he says. "And it aligns with our positioning of the Note."

The second element caps a video contest on Vine and Instagram that began in July, where consumers could upload videos that incorporate a cutout of the car. Six people won $1,000 each and three grand-prize winners saw this short videos incorporated in a new 45-second national commercial airing Oct. 19 during the Florida State-Clemson college football game on ABC.

"We really lucked out on the [ad placement]," says Marx, who explains that the game Nissan bought for the ad turns out to be between the number-six and number-three ranked NCAA teams.

Marx says Nissan got about 600 submissions of short videos, in which people had to print a cutout of a Nissan from a Web page then make the video with the cutout.

"One of the learnings is if you are going to ask consumers to submit user generated content, you have to make it really turnkey and easy," he says. "Most people are consuming this content in between doing other things -- during a commercial break or between tasks. We were asking them to download, print out, get scissors, cut picture of the Note and write a script. That's a lot of heavy lifting, and while we got hundreds of entries, we didn't get as many as we'd hoped."

But he also says the company, which promoted it on its social sites and got earned media by sites like Mashable, and from the participants themselves, got about 50 million impressions.