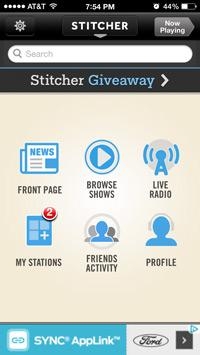 I can almost hear Stitcher CEO Noah Shanok shrink on the other end of the phone when I gush about how much of a fan of podcasting I have been for many years. You see, although Stitcher is the largest aggregator of downloadable audio programs on Android, and the second-biggest on iOS, they don’t like using the P-word much over there. “We have mixed feelings about ‘podcast',” he says. On-demand radio, if you please.

As Stitcher announced its 12 millionth mobile download this week, it crowed about the ways in which mobile devices have reinvigorated a form that seemed stuck and narrow when it was mere “podcasting.” That term brought with it the woes of physical synching of device and PC, constant tending, and an absence of on-the-fly discovery of new content on the device itself.

Mobile delivery fixes a lot of that, and so the makers and aggregators of this on-demand audio format feel they are getting a second at-bat now. Twelve million downloads is good, but not a blockbuster -- and Stitcher still dances around the actual regular user base. “In the top 100 shows, there is a 15x growth in unique listeners in the last year and 9x growth in listening time,” Shanok says.

The publisher of Entrepreneur On Fire says they have gotten over 2.5 million show downloads with 450,000 more each month. He is seeing $50,000 in revenue a month from the show using ads.

Shanok tells me that on average, a user is listening between 7 and 10 hours a month. He welcomes any mobile app that helps users start thinking of their devices as radios. Spotify, iRadio, Pandora -- all of them are increasing the device’s role as personal audio.

Mobile podcasting also can do some unique tricks in discovery that leverages the on-board alerting system. You can not only notify people of new episodes, but also leverage the knowledge of user taste to alert a fan of a certain comedian or musician of their guest appearance on another show. “We have had incredible success with that in terms of open rates and effectiveness,” he says.

Advertising into podcasts (oops) was tricky before mobile, since countless schemes tried to jerry-rig serving ads into the download. Most podcasters found early that the integrated message made by the podcast host was both more practical and effective. I know I can still remember who sponsored early Onion News minute-long shows and many Slate shows. But Stitcher is selling into the mobile platform ads that can be sewn into the show more easily at play or download. He says the demographics of podcasting (what shall I call it, ODR?) are strong. They are typically affluent and professional, with average income over $100,000, 75% in the professions and 55% have graduate degrees. They get over a 90% completion rate on audio ads, he says.

Shanok says  the dedicated podcast listeners are addicted and fall into rituals. They see usage spikes during commutes, of course. But there are also a lot of people using it first thing and last thing. An alarm clock function is among the most requested features, so people can wake up to their podcasts as they might morning radio.

Despite everyone else’s draw to video, Stitcher is “religious” in its devotion to audio, he says. The interface is cleaner and simpler without having to account for video. It also makes the content more portable to cars. In fact, the app has a car mode with huge buttons for control and quick rewinds. Stitcher integration is built in to some cars, including some from Ford, GM, BMW and Mazda. He says that half of terrestrial radio is happening in the car anyway, so that is the place an on-demand version has to be.

Personally, I am among the addicted. For years I synced my iPods, iPads, iPhones and desktop iTunes with very specific programming aimed at different parts of my day (aerobic exercise vs. weight-lifting at the gym vs. in the car vs. TV watching, etc.). Drive time and office radio listening use cases spawned specific types of programming aimed at those situations. On-demand radio allows for a much wider set of use cases with much more sculpted and nano-target listening experiences. In my mind this was always a model of media consumption that was well ahead of the curve. It foreshadowed an on-demand world of narrowcasting, people shaping for themselves unique media environments out of the fragments both big media and user-generated sources put into the ecosystem. And in this brave new post-mass media world, advertisers need to imagine better formats, like in-show sponsorships or combining in-stream audio ads with display or call-to-action complements on the screen (a la Pandora).

But the other lesson of podcasting is that for now its appeal is still narrowly focused, even with the new opportunities of mobile. And it may never advance beyond that. This may tell us something about the promise as well as the limitations of self-made media environments. Even as the friction is lessened, the question remains of how much people want to construct their own media day. After all, the captains of the media industry have been building it for them for over a century. All we ever had to do was walk in the room and turn on a switch.