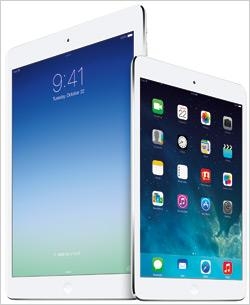 Apple, as expected, on Tuesday unveiled upgraded versions of its iPad and iPad Mini devices as it seeks to fend off rising competition in the tablet space.

At a much-anticipated press event in San Francisco, the tech giant debuted a slimmer fifth-generation iPad -- dubbed the iPad Air -- and a new iPad Mini that includes the sharper “Retina” display of the larger tablet.

Both iPad Air, weighing in at just a pound, and the IPad Mini are equipped with an A7 chip, which is eight times faster than the first iPad and offers graphics performance that is 72 times faster. That means both will be even better suited to playing video games, watching video and serving as a portable media platform.

Apple says WiFi will also be twice as fast on both models, which will still have 10-hour battery life. The iPad Air will start at $499 for the 16 GB version, while the new Mini without Retina display will start at $299, and with Retina, at $399.

The iPad Air will go on sale Nov. 1, and the new Mini, later in the month. During its event Tuesday, Apple also took the wraps off several other products, including Mavericks, its latest desktop operating system, updated versions of the MacBook Pro and MacBook Air. Popular applications including iPhoto and iMovie are also moving to the iPad and iPhone. GarageBand, Apple’s music creation app, will also extend to the iPad.

Cook pointed out that 475,000 custom apps overall are now available for the iPad, still giving Apple a significant advantage over competing platforms, including Android.

During his presentation, Apple CEO Tim Cook announced that the company has sold 170 million iPads to date, and cited a figure showing about 80% of all tablet use takes place on the Apple tablet. The message was clear: We’re still the top dog when it comes to tablets. But Apple faces a growing host of challengers in the device category it essentially created.

Apple introduced the latest iPads on the same day Nokia launched its first tablet and Microsoft released a new version of its Surface tablet. Along with its 10.1-inch Windows tablet -- the Lumia 2520 -- Nokia rolled out a pair of “phablets,” that mark its final product releases before its handset business is acquired by Microsoft.

Both companies want a bigger share of the tablet market long dominated by Apple; it has become increasingly fragmented since the iPad’s arrival in 2010. As of the second quarter, Apple still claimed by far the largest chunk of tablet shipments at 32.4%, followed by Samsung at 18%. But Apple’s shipments were down 14% from a year ago, while those of Samsung and other rivals such as ASUS, Lenovo and Acer grew by triple digits.

Gartner projects tablet shipments overall worldwide will grow 53.4% this year to 184 million units, with smaller 7-inch devices continuing to gain favor over larger ones ones like the original iPad. That trend, along with the proliferation of lower-cost models, will make it hard for Apple to regain ground even with redesigned devices.

“It will be difficult for Apple to move the needle on new tablet sales, as the strongest growth is coming from emerging markets where customers are more price-sensitive,” noted Forrester analyst Sarah Rotman Epps. “The low end of the market doesn't belong to Apple, and they haven’t aggressively tried to change that.”

The iPad Mini -- even at the lower starting price of $299 -- faces stiff price competition in the U.S. as well from challengers like Amazon’s Kindle Fire, which starts at $140, and Google’s Nexus, which sells for $230. Even so, analysts expect demand for the Mini could outstrip a limited supply at launch.

Jeffries analyst Peter Misek estimates there could be as few as 2 million to 5 million available when they go on sale in November. If Apple can meet demand, RBC Capital Markets analyst Amit Daryanani predicts the Mini will outsell the full-size iPad by two to one during the holiday season.

Tablet ownership in the U.S. has grown to 35% as of September -- up from 25% in November 2012, according to the latest survey from the Pew Internet & American Life Project. Tablet owners tend to be more affluent and have higher levels of education than average, the study found.

Separately, eMarketer estimates 40% of Americans this year will use a tablet at least monthly this year, and more than 20% will use an iPad at least once a month.