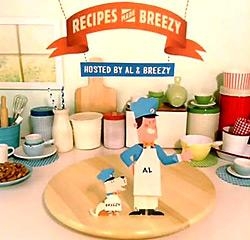 “Recipes Made Breezy” is made up of six Vines – looping video clips no longer than six seconds – launched together to create a single episode.

To create the show, the brand's agency, Y&R California, worked with Melbourne, Australia-based yelldesign, which used paper models to animate hosts "Al" and "Breezy," a milkman and his dog who were introduced in Almond Breeze's “Welcome to Breezeville” TV commercials.

The characters are shown whipping up the smoothies with Almond Breeze, a non-dairy milk alternative, and ingredients including raw coconuts, pineapples and kale.

“Recipes are the entry-point experience for the Almond Breeze target, and smoothies are a great way to encourage trial,” said Ronny Northrop, executive creative director at Y&R CA. “Vine is perfect for bringing recipes to life," and the agency realized that it "might have an original Vine idea on our hands if we launched multiple Vines at the same time and made a little show out of it,” he noted.

All six of the Vines in the show can be viewed on a dedicated "Recipes Made Breezy" Tumblr site.