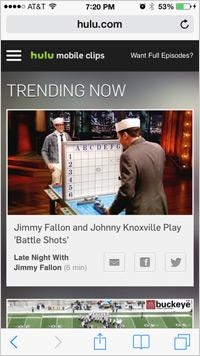 One of the puzzles to me about Hulu’s mobile strategy has been its reticence about merchandising its own best asset…content. I mean, it has all that TV stuff (which most people kinda like, ya know?). But if you ever tried to stream the free content from Hulu.com on a device you usually ended up with a frustrating no-go message. Go get the app, it demanded, even though general Web users have been getting free clips and other content from Hulu.com for years. The apps are just downright unfriendly to all but paying customers. No login, no nothing.

I never really got why Hulu didn’t take the opportunity of showing these obviously interested mobile site visitors and app downloader what they were missing. Finally, Hulu lifts the skirts a bit for mobile Web surfers. Announced this week at the company blog, Hulu.com on devices now renders TV samples. The default landing page gives you Trending clips, but you can also drill into trailers, news and comedy verticals for more. The full effect is a kind of TV recap from high-profile shows like The tonight Show, Colbert, the voice, etc. with other newsy items from CelebTV.

Not sure why Hulu didn’t want to do this all along. After all, it gives each of the shows featured a promotional hit. It adds to the overall video inventory. I saw pre-rolls on pretty much everything. And the Web app can be used as a daily catch-up or check-in on the TV medium. If done well, the free area of Hulu should be promoting the one behavior all of the consortium’s co-owners want -- more live TV watching. Why wouldn’t the networks underwriting this venture want Hulu.com on every device to be the place you check-in about TV and preview what is on tonight?

I still don’t get why Hulu isn’t already doing this sort of smart merchandising in its apps across both devices and set-top boxes. That Hulu app is available on just about everything I won that goes into my TV, from PS3 to Chromecast to Apple TV. But not a one of them tries to sell me a thing. They are just dead icons on my interface unless activated.

HBO knows better, by the way. At least their apps stream the kinds of peeks and teasers that sell the service and give you a sense of what else is behind the paywall. Hulu wants to be Netflix, which probably sells itself with a single clear proposition --  tons of movies everywhere. Hulu, which has a fraction of the subscriber base, needs to make the case for people paying to see old episodes.