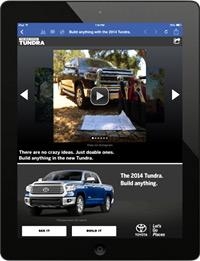 Since they launched earlier this year, both Instagram and Vine have proven to be more than just multimedia distribution channels. They are also serving as effective sources of eye-catching media that can be redistributed across other digital and even TV channels.

A new ad unit from Moontoast turns this trend into a format in a new campaign from Toyota for its Tundra truck line. The unit pulls into a gallery a series of videos made for a hosted Instagram video gallery. The Moontoast Social Rich Media Platform is capable of integrating both still and video content from Instagram. It can then be distributed as an ad unit and even pulled into a Facebook feed.

The Toyota ad includes a number of short videos that use the stop-motion style that has become the signature of both Vine and now Instagram video.

The brand was looking for a way to connect with fans in the social channels as well as deliver more content and education around the launch of the 2014 Tundra. The rich media ad unit allows for integrated multimedia as well as consumer engagement with the ad to find out more. The ad unit is also able to leverage newer content rules at both Facebook and Twitter to allow for more prominent embedded image and video viewing.