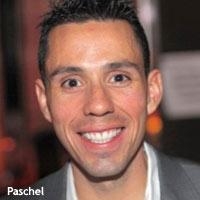 Online radio service Pandora hit a new milestone when it surpassed $100 million in ad revenue in a quarter for the first time during its fiscal third quarter. It also appears to have withstood the September launch of iTunes Radio, heralded as a potential “Pandora killer” because of the Apple rival’s huge installed and entrenched ecosystem.

With Spotify expected to announce free, ad-supported service on mobile this week, however, the company may soon face another new threat. Discussing Pandora’s ad business, the competitive landscape and related topics on Monday was Dominic Paschel, vice president of corporate finance and investor relations. The following are some of the highlights of his Q&A session at the UBS global media and communications conference in New York.

Ad targeting:  Because Pandora is among the platforms that requires users to log in, it has the ability to collect demographic and location --  ZIP code data that can be used for ad targeting, as well as tailoring music to each user’s tastes. That capability is especially important for reaching specific audiences in the largely cookie-less mobile environment.

Balancing advertising and the user experience: Pandora typically shows seven display ads per listener hour and runs 2.5 audio ads (of 15- or 30 seconds) per hour. Users might also see a video ad. Visual ads, on a CPM basis, sell for $5-$7; audio ads, $8-$12; and video ads, $15-$25. The sell-through rate -- the proportion of premium advertising sold directly by Pandora -- is higher on desktop than mobile.

In mobile, which makes up 81% of Pandora’s inventory, CPMs are now in the low $30 range compared to the low $20 range a year ago, due to higher sell-through. Ads on the desktop command a $60 CPM because that remaining 19% of inventory is effectively sold out, Paschel said. While the ad load has grown in recent years, he argued that the company doesn’t need to increase the load to boost ad revenue so much as to continue to improve sell-through.

Selling to local radio markets: Local is Pandora’s fastest-growing ad segment. The business has accelerated through its partnership with digital audience measurement firm Triton Media, as well as its integration with the Strata and Mediaocean media-buying platforms. The company now also has local sales staff totaling over 80 people in 29 of the 50 top regional markets.

Pandora’s auto industry push: The service is now wired into some 100 different car models in the U.S., or roughly a third of all models. “We’re very pleased with the amount of adoption we see there," said Paschel, noting that many automakers are highlighting Pandora as a feature in their advertising. That includes Honda’s holiday-season TV spots with Michael Bolton making fun of himself.

“We don’t pay for these types of advertising,” noted Paschel.

Capping of listener hours: Pandora imposed a cap on mobile listener hours from March to September, after previously doing so on the desktop from 2009 to 2012. The aim is to reinvest money saved on music royalty fees back into other areas of its business. The mobile cap was dropped as the company improved its mobile ad RPM (revenue per thousand impressions) to $36 per listener hour).

Industry competition: Paschel maintains that broadcast radio is still the company’s biggest competitor, with 93% of the population still listening to terrestrial radio on a weekly basis. He observed that all online music services are incorrectly lumped together, even if they’re not direct competitors. He suggested that Apple and Spotify, for example, merely use Internet radio features to get consumers to become subscribers or download music.

“We view Internet radio not as an on-ramp but as the freeway -- the main reason for being there,” said Paschel.