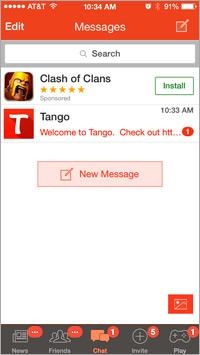 wned mobile ad exchange MoPub on Thursday introduceda native ad product for mobile app publishers using its platform. The company’s Native Ad units are meant to match the look and feel of an app’s surrounding content, except for a “Sponsored” label in the upper right corner.

Social-networking app Tango is the first to sell native app inventory through MoPub. Ads for the game “Clash of Clans” from Supercell appear in the app’s feed similar to Promoted Tweets on Twitter or news feed ads on Facebook. Tango also runs a smaller version of the native unit in the app’s chat tab.

MoPub says its Native Ad offering will help open up new business and revenue opportunities with direct ad partners without requiring them to build any custom units. It also suggests that publishers can use the solution to promote their own content and drive installs to other ads.

Twitter, which helped to pioneer native ads in social media, also stands to benefit from MoPub extending the format to thousands of other apps. About two-thirds of Twitter’s advertising overall comes from the mobile side.

Kevin Weil, Twitter’s vice president of revenue product, told The Wall Street Journal: “Over time, you’ll definitely see MoPub and Twitter and our two products come closer together; this is just the first example of that.”

Twitter acquired MoPub in September for a reported price of $350 million in stock.