Competition for mobile advertising space available for real-time bidding (RTB) has increased in a major way this year. Bid density, or the number of bids per impression in an exchange-based marketplace, has shot up more than 200% in 2013. Similarly, bid volumes have grown more than 500% since January.

The data comes from the Nexage Analytics Report, which was released today. As a result of a swell in demand, the portion of money traded via RTB on the Nexage mobile exchange has grown from 26% in January 2013 to more than 60% as of October 2013. In the early months of 2012, RTB-traded inventory accounted for 13% of the money flowing through the exchange.

In July, Nexage reported a milestone -- that over 50% of the money traded on their mobile ad exchange was via RTB. The data released today proves that number has and is expected to continue rising. In July, Victor Milligan, Nexage's CMO, admitted the company "expected to have fast growth" in terms of RTB use, but that "it's fair to say this has exceeded expectations." 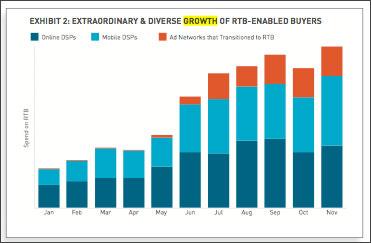 Nexage says the results reveal several trends, including a "tremendous increase in supply available through RTB." In a similar vein, the report suggests interest in private exchanges has taken off, which makes sense, because private exchanges were more or less created to get publishers more comfortable with automated trading.

Nexage says revenue from their private exchanges grew 569% in the third quarter, citing CPM growth of more than 140%. The company notes both figures (revenue and CPM) are still growing in Q4.

Even with the meteoric rise in mobile RTB and the spreading adoption of mobile private exchanges, Nexage anticipates more. "We expect RTB share of spend to continue to grow as buyers expand their businesses and agencies move more money to programmatic budgets," the company predicts.