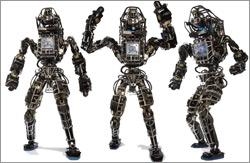 Google has acquired military robotics maker Boston Dynamics, but it's one of many such companies during the past year.

Behind the robotics and automation division at Google sits Andy Rubin, Android operating system guru. He took the position in March. In the past year, Google has acquired about eight robotics companies.

As diversification becomes important for Google, it could explain why the company has moved more strongly into hardware -- and why it would make an investment in a semiconductor manufacturer.

Spun off from the Massachusetts Institute of Technology, Boston Dynamics does a lot of work with the U.S. U.S. Department of Defense. The company supports about nine robots, such as BigDog, a rough-terrain robot about the size of a large dog or small mule that can walk, run, climb and carry heavy loads. It weighs about 240 lbs.

The goal is to achieve animal-like mobility on rough and rugged terrain that is too difficult for any existing vehicle, according to the company. BigDog's four legs are powered by an engine that drives a hydraulic actuation system.

Self-programmed mechanics remains important to Google. There's little doubt that the company will use the technology for more than its self-driving cars. Although the cars have reportedly had one accident, data gathered from Google's self-driving Prius and Lexus shows they are safer and smoother when steering themselves, compared with when humans take the wheel.