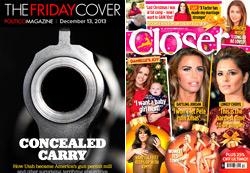 The print advertising market may be far from jolly -- but as the year draws to a close, magazines are alive and kicking, according to MediaFinder.com, which tallied 185 new magazine launches in 2013, while just 56 titles closed in the same period. Both numbers were down a bit from 2012, when 227 magazines launched and 82 were shuttered.

Notable new launches in 2013 included Politico magazine, from the publishers of the well-known blog; Allrecipes, another Web-to-print publication from Meredith, owner of Allrecipes.com; Glam Belleza Latina, a Spanish-language title from Glamour; Closer, a new celebrity title from Bauer; and Domino, a revival of the popular shelter title targeting younger women. It closed in 2009 but now enjoys a second life as a quarterly.

On the other side of the ledger, the list of magazines closed in 2013 includes Babytalk and Parenting, both shuttered by Bonnier, which sold the digital rights to Meredith Corp.; Skateboarder, nixed by GrindMedia in April; Garden Design, turfed over by Bonnier in April; and Snow, another Bonnier title buried in February.

All You Raises Rate Base

All You is bumping its rate base up 3% from 1.5 million to 1.55 million, publisher Suzanne Quint announced Thursday, marking the 11th increase since the magazine launches in 2004 with a rate base of 500,000. The magazine, which targets value-conscious female shoppers with distribution via Walmart, Publix, Kroger, Target, and CVS, is also building a substantial subscription based, according to Quint.

In 2013, the magazine added new advertising clients including brands from Dyson, Sprint, Kitchen Aid, P&G, and Netflix. In the third quarter of the year, All You’s ad pages were up 6.5% compared to the same period in 2012, to 193 pages.

Reader’s Digest is getting a new look beginning with is January 2014 issue, covering both its print and digital platforms. On the print side, changes include a new logo emphasizing the brand’s commitment to the reader; a special subscriber cover designed with a removable bookmark so readers can save their places as they read; new components blending shorter, humorous columns with longer, more serious reads; and a new page design with more photography and modern illustration. Turning to digital platforms, the magazine is introducing a new mobile phone app and a redesigned Web site, echoing the new streamlined look of the print edition. To promote the new digital product, Reader’s Digest is offering consumers a free digital download of the January issue of the magazine, available by texting readup to 51684 or visiting www.rd.com/free.

Sporting News Media has launched a new iOS app for its flagship Sporting News property. The new Sporting News app aggregates content from across all relevant sources, including sports publications, portals, local media outlets across the U.S., sports influencers on Twitter, and of course reporting from Sporting News itself. The app also enables fans to curate content, tweets and TV listings around their favorite teams, leagues and sports.

New app features include improved visual navigation for the Sporting News Daily Issue; a News Feed curated by sport and team from SN and other trusted sports media sources; Twilights, featuring sports tweets highlighted by SN editors; and What to Watch, with personalized TV listings based on ZIP code and service provider. Advertising opportunities include magazine-like creative in the Daily Issue, featuring portrait or landscape with share-of-voice ownership; anchored dynamic units in the News Feed with first party DMP-enabled behavioral targeting; sponsorships within Tent-Pole Events; What to Watch, Scores, and Sport Sections; and custom integrations into SN’s native feed and Twilight platforms.

Courtney Matthews has been appointed to the newly created position of director of integrated marketing for Backpacker and Climbing magazines. She will be responsible for executing multimedia programs and events with outdoor industry clients, as well as leading collaborations with select nonprofits. Matthews previously served as marketing director for Rodale Inc.’s Runner’s World and Bicycling. She began her media career in 1994 as a marketing coordinator at Backpacker.

Launched in 1938 as “an experiment for American ‘moppets’ under 10," Jack and Jill magazine, is still going strong after 75 years in print. Through the years, the publication has attracted top talent, including author Pearl S. Buck (“One Bright Day” 1950), and cartoonist Ted Key, who contributed the feature “Dick and Liz” from 1961-1972. Recently, New York Times bestselling author Ben H. Winters penned an original short story for the magazine. Jack and Jill also encourages young writers, publishing reader photos, poems and more.

Wendy L. Wilson has been named managing editor for Jet, where she will be responsible for generating and writing original stories and developing content ideas for the magazine and Web site. Wilson formerly served as news editor for Essence and Essence.com; she originally joined the magazine as a staff writer in 2005. She also worked at Teen People and InStyle magazines