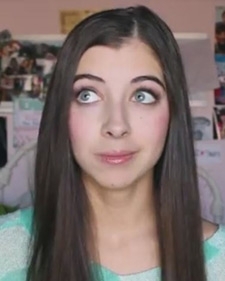 Well, you knew this was going to happen. As Facebook sheds teen use to messaging apps and mobile-first nets, companies are rushing into the space with alternative experiences targeting adolescent discontent with “the social network.” Swapmees may best be described as a selfie-swapping teen social network that game-ifies people peeping and discovery.

Restricted to 13 -to-19-year-olds, the iPhone app invites members to make five images of themselves into trading cards that they swap with other players. As a 55-year-old (although eternally 15 in my head, of course) it would be downright creepy for me to test this one out myself. But the relentlessly perky, big-eye Zooey Deschanel-ish spokesperson appeals to Facebook-fatigue. Are you tired of your family following you around every social media site -- even your second cousin’s dog?

The game cleverly makes friend-finding into a game that earns points. As people swap and own new cards it gives them access to new people via an embedded text message interface. How this actually works kind of makes my brain hurt, but it seems to be precisely the kind of weird rule set that appeals to young spry minds.

The app is free, and according to the company, it has every intention of keeping it so. A company spokesperson told me they are eschewing in-app purchases and advertising for prize sponsorships and underwriting specialized badges.

The rapid rise of SnapChat, Kik and other messaging apps seems to have made the case for there being room for innovation in the social media space. The purported erosion of teen interest in Facebook accelerates the trend to develop creative alternatives.

Who in creation knows which will take hold for how long? This kind of wacky selfie-trading model is endearing in the audacity of the mashup. How many more hot trends can it fit together in one package? Selfies, social networks, Facebook-flight, game-ification, app-based messaging. Mobile video is the only hot trend missing here…or maybe Bitcoin.

As teens may or may not be fleeing Facebook, look for the market to heat up with apps positioning themselves as safe havens that address the underlying discontent of teens with their father’s social network. 2013 was the year Facebook officially lost whatever last shred of cool it may have had. There is nothing more entertaining than watching startups fall all over themselves to appear cooler than one another. Let the Hip Wars begin.