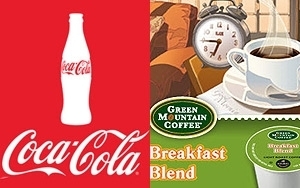 Coca-Cola is also acquiring a 10% stake in Green Mountain, for about $1.25 billion.

GMCR’s Keurig Cold single-serve beverage system is under development and is expected to be available in GMCR's fiscal 2015, which starts Sept. 28. The new system will let consumers use pods to make carbonated drinks, enhanced waters, juice drinks, sports drinks and teas.

"By pairing The Coca-Cola Company's brand leadership and global footprint with GMCR’s innovative technology, together we will be able to capitalize on the many exciting growth opportunities in the single-serve, pod-based segment of the cold beverage industry," said Coca-Cola chairman and CEO Muhtar Kent.

For Coke, the deal seems designed as a partial answer to worrisome trends. Soda consumption has been declining for a decade, and diet soda sales are now declining at a faster rate than regular soda sales.

Furthermore, the leading home beverage maker, SodaStream, has become a growing competitive threat both for traditional beverage giants and for GMCR.

SodaStream touts both environmental and health advantages (its machines let consumers tailor their beverages — to reduce sugar, for example). And the company has formed a growing number of its own partnerships with branded beverage makers (examples include Welch's, Ocean Spray and Del Monte). It's also formed partnerships with brands including Samsung and KitchenAid to incorporate SodaStream machines in kitchen appliances.

However, for SodaStream, "having a company like Green Mountain as competition is one thing...[but] to compete against a Coca-Cola and Green Mountain partnership is much more formidable," points out 24/7 Wall Street.com.

Coke will make all of its brands, including non-soda offerings such as the Minute Maid and Powerade lines — available through the Keurig Cold system. Further, its partnership with GMCR gives it a large footprint in coffee and tea, which, in contrast to soda, have been showing sales growth, points out The Wall Street Journal.

In a press call, Coca-Cola's Muhtar described the partnership with GMCR Keurig as a "game-changing" innovation, but he also said that Coca-Cola bottlers will have a "very complementary role" in how the company's products are marketed under the Keurig system, WSJ reported.

How will retailers view the development? Coke is betting that sales from Coke portfolio brands in pods for the new machines will more than offset cannibalized sales from its traditional branded beverages in bottles and cans. Certainly, there are no indicators that declines in traditional soda sales and competition from SodaStream and other types of beverages will let up, so jumping on a new growth opportunity would indeed seem to outweigh any potential risks.

Home-made beverages shouldn't pose much soda-sales competition for restaurants that feature Coca-Cola products. Besides, Coca-Cola has for years now been pushing adoption of its own "mix your own" solution in these venues: Its Freestyle vending machine, which lets consumers choose from/mix more than 100 flavors.

Coke's GMCR investment is expected to close in March 2014, subject to customary approvals and conditions.